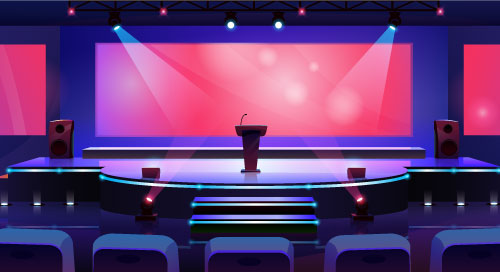 From an IT perspective, audiovisual (AV) equipment might as well be alien technology. Most AV systems use legacy platforms understood by only a tiny number of specialists. Only rarely can these systems connect to a wider IT infrastructure. In fact, AV systems from different manufacturers usually aren’t even compatible with one another.

As a result, specialized integrators must be called in when components need to be replaced or upgraded. “Every time you want to do something different in the AV space, you have to do a forklift rip-and-replace,” says Jason Moss, Vice President of Alliances and Market Development at QSC, an AV connectivity solutions provider and manufacturer.

It’s a time-consuming, expensive, and frustrating process for IT teams, which are unable to manage AV systems themselves, as they do the rest of the company’s technology. The problem has become more acute as the pandemic has escalated the need to update technology to support more hybrid collaboration environments. But because “ripping and replacing” a traditional AV system can be such a daunting task, many companies miss out on new technologies that can better enable their day-to-day business needs.

A software-based AV system, such as the Q-SYS Ecosystem from QSC, allows audio, video, and control processing to be integrated in a single piece of hardware, which greatly reduces integration complexities, making it simpler for IT teams to monitor and manage. Being software-based also means that features and functionality can be added in the future through simple firmware updates.

Not only is it software-based, Q-SYS is built around an open IT-friendly ecosystem that leverages the power of Intel processing to deliver features and functionality at the software level, greatly reducing the need for disparate, single-purpose hardware found in traditional AV systems (Figure 1). This approach is intended to make AV much more accessible to IT support staff that is now tasked with managing these types of systems. This new paradigm also allows additional endpoints without requiring complex programming that only a high-end specialist understands.

Updating an AV system can be such a hassle that many companies miss out on new technologies.

“With a software-defined platform, hardware no longer immediately depreciates from the moment of installation. Instead, utility and value increases with time as feature sets and functionality are added at the software level without additional hardware,” added Moss.

Avanade, a leading digital innovator in IT services, illustrates how an enterprise can improve AV management and gain flexibility while saving money. Avanade embraced the software-based IT-friendly model when upgrading their office locations.

The Seattle-based company wanted to provide a seamless, high-quality AV experience not only for its 800 headquarters employees, but also for workers in 45 other locations. After adopting Q-SYS, the company’s IT operations team were able to view and configure AV equipment in all locations from their offices in Chicago and Toronto.

One such example is when employees wanted to watch the FIFA Women’s World Cup soccer competition in their Seattle office. IT workers were able to remotely reconfigure equipment in meeting rooms to broadcast the games in multiple meeting rooms simultaneously. Once the games ended, they reverted the rooms to standard operations with the click of a mouse.

Being an open platform also expands the possibilities for integrating with third-party devices. From microphones to building management systems, as long as it is network-based with an open API, Q-SYS can integrate it. Q-SYS uses Lua, a modern and open programming language to allow for simple integration of common devices that can also be monitored and managed along with the rest of the system from a single pane of glass.

In the absence of a crystal ball, companies with software-based AV are positioning themselves to transition to future capabilities that have not even been dreamed up yet. Shifting to these new technologies without delay or friction could provide a significant edge over competitors. “Technology moves fast,” says Moss. “With a modern Intel-based infrastructure, companies can continue to improve their AV solutions with software for years to come.”