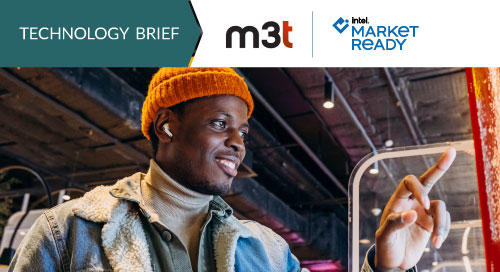 Are we headed for a cashless society? The question has fueled debate for years but the majority of consumers and businesses don’t think it’s in the cards. M3 Technology Solutions (M3t), a turn-key kiosk and management system solutions provider, isn’t taking sides. Its self-service multifunction kiosks let consumers decide for themselves.

“A rich set of functionality makes the technology appealing to users,” says M3t Chief Operating Officer Dylan Waddle. “It gives the consumer a significant amount of flexibility, if you will, in what they’re doing with their currency.”

The financial kiosks have been popping up in places like convenience stores, gas stations and casinos. They are especially popular with retailers that run unattended convenience stores. “People can put cash in, either load a prepaid card, or get a QR code to go buy merchandise, come back and get their change,” says Waddle.

Banks, of course are also interested. They’ve been placing kiosks in lobbies and other locations and may eventually replace their ATMs. “Banks are looking at self-service technology in a bigger way,” says Waddle. “Larger financial institutions like JP Morgan are starting to push more and more functionality to the self-service kiosk as quickly as they can.”

Whether you’re a bank, casino, or retailer, a self-service kiosk is a tidy way to offer a digital experience to consumers looking for convenience, flexibility and speed. The technology also helps businesses optimize staff utilization and improve cash management.

M3t got into the kiosk business a decade ago because it saw an opportunity in the trend toward cashless transactions. “Our core focus from inception was on back-office management systems, specifically businesses that manage a lot of physical currency across multiple sites,” Waddle says.

Rather than outsourcing manufacturing, the company decided to set up is own factories in the U.S. “We determined that in order to be successful we were going to have to become fully vertically integrated, so we started manufacturing kiosks.”

So now, when businesses buy m3t’s backroom management platform, they can get the kiosks and infrastructure that goes with it. The platform allows businesses to automate their cash management. With its software, businesses can track the movement of cash at every step. A bank, for instance, can track cash as it flows in an out of the vault, cash dispensers and tellers.

The M3t kiosk gives the consumer a significant amount of flexibility in what they’re doing with their #currency. M3 Technology Solutions via @insightdottech

Waddle believes the self-service banking kiosks will become ubiquitous in the near future. For example, M3t is looking at deploying systems at entertainment venues and universities. “We’re getting ready to put kiosks in Busch Stadium (St. Louis Cardinals), American Family Field (Milwaukee Brewers), and Notre Dame.”

Outdoor spaces are a major focus. Until now kiosks have predominantly resided inside, but pretty much anywhere people need to access cash, whether in legal tender or digital form, is a good place for kiosks. And their appeal to consumers is sure to increase as more functionality is added.

Already, consumers can have a range of interactions with the machines. For instance, a kiosk will break a $100 or $50 bill into smaller denominations. Through a service called UltraCash, users can set up a six-day line of credit tapping their bank funds. Another feature, called UltraCard, lets users move cash to their prepaid open loop cards such as Mastercard, which can be used anywhere Mastercard is accepted.

“That makes us pretty unique because you can have more access to cash from our terminals than at a standard ATM,” Waddle says.

For consumers who still prefer cash, the kiosks lets them use even cashless stores. “They come in and put cash into our kiosk. They get a QR code or they get the funds loaded to their phone. They go get what they want, come back, and get their change at the kiosk—and their receipt if they want a physical receipt,” Waddle says.

With all the functionality they deliver, M3t’s self-service kiosks store a lot more cash than a typical ATM. “Because of that, they’re typically made of 12-gauge steel—heavy-duty, hardened solutions that get bolted to the ground, bolted to the wall. It may not even come out if you tried to drag it out with a car,” says Waddle.

Another security layer involves sirens and alarms that go off at the terminal while sending alerts through the cloud to a management console. Administrators can also access the management software from a mobile app. And the technology is compliant with PCI (Payment Card Industry) standards and follows cloud infrastructure security protocols.

To further enhance security and convenience, Waddle says, M3t is working with Intel® to add biometric recognition. Eventually, accountholders won’t need a card or phone to use a kiosk.

Intel will remain a key partner as M3t executes its ambitious vision for self-service kiosks, providing cash and cashless options to consumers wherever they may be. “I feel like you’re not just going to see a kiosk in every location, you’re going to see one in every single room, says Waddle. Companies see them as core providers that are supplementing employees in a really big way.”

For more on banking kiosks, listen to Self-Service Tech Trends in Retail, Banking, and Hospitality.