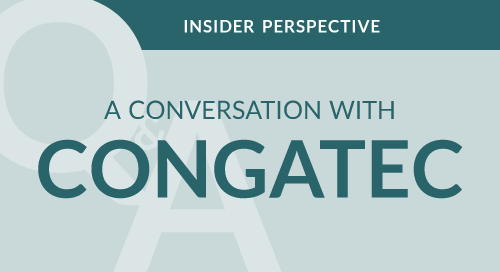 To learn all about the new chips, we spoke with Christian Eder from Congatec, a leading supplier of embedded computer modules. He explained the importance of capturing data when it occurs, the beauty of hardware consolidation, and the many target applications that could benefit from these new CPUs.

Kenton Williston: Can you tell me a little bit about what you do, Christian?

Christian Eder: I’m the Director of Marketing for Congatec, a company which is dedicated to embedded computer technologies, mainly on computer modules.

Kenton Williston: From your point of view, what’s so exciting about the new Elkhart Lake series of processors? What makes them different from what we’ve seen before?

Christian Eder: These processors are a perfect fit for computer modules; also for the single-board computers we make. Of course, with the smaller structures of 10 nanometers, it’s got quite an increased compute ability. And although power consumption is quite low, it’s always shrinking. So we get more performance in the same power envelope.

We have four CPU cores, which is good for running things in parallel—multi-threading things. Especially the graphics, with up to 32 GPU cores. So it’s going to be a significant help also towards AI—because GPUs can be used for more than just graphics.

And for industrial use, maybe the biggest step here are the real-time capabilities—Time Coordinated Computing. TCC is implemented here in the CPUs, which is really ideal for rugged, industrial, motion-control hardware.

Kenton Williston: The list of features on this thing, it’s like—this is clearly something meant for IoT applications. Would you agree with that? This is a pretty different approach for Intel in terms of how custom-tailored this is for embedded.

Kenton Williston: One of the other features that really stands out to me is all of the capabilities around real time. How do you see that feature set being utilized?

Christian Eder: We have tons of applications here when it comes to words, motion control, robot controls—that’s always real-time critical. But it’s not limited to this use case. You have to capture the data when it occurs. And there is no second chance to do it; if you miss the sample, it’s lost. That’s critical for a lot of medical applications. And in the past, there was a lot of dedicated hardware around to make real-time capabilities. Now, it’s all built in, and you can do quite a lot.

We can bring multiple operating systems together. We can have the real-time tasks installed on a single core, which takes care of, let’s say, the emotions of a robot. But a robot nowadays also needs to have eyes, if we have cameras attached to do some AI analytics with the pictures it’s capturing. And this can be installed in parallel on the other cores. Of course, we’re still talking about an Atom. So don’t expect tremendous frame rates. But there are much smaller applications where this application’s performance level is more than enough.

Kenton Williston: None of these tasks is necessarily all that heinously difficult, but being able to do them all on one platform is quite advantageous, in terms of having a system that has lower costs, lower size, lower power, and presumably could even be a little bit easier to design. Would you agree with that?

Christian Eder: Yes. That’s the whole idea of this hardware consolidation. In the past, it used to be three different boxes being wired up with some cables and some Ethernet switches and whatnot. Now, you can bring all sorts of applications together in one tiny, low-power box. And of course it’s a tremendous savings in hardware costs. It’s just one system, much easier maintenance, and everything together on one platform. So, I totally agree that this makes sense. And we will see more and more of these applications.

Kenton Williston: But it seems like a lot of the other capabilities that surround the CPU are really what make this platform interesting. And one of them that you mentioned is that the GPU performance has really tremendously improved. I believe you can take advantage of that with the OpenVINO platform. Is that right?

Christian Eder: Absolutely. This really gives a boost and allows it to operate AI algorithms at a reasonably good speed. I have to say it always depends on the details and on the complexity of the task, but let’s say an average task can be performed quite well here.

Kenton Williston: So, just to recap what I’ve heard so far when we’re talking about the Elkhart Lake platform, which is also the new Atom 6000 family, as well as some other Celeron and other brand names that go along with that.

Some of the things that make this pretty interesting, and different from what’s been around before include:

And all these things are pretty amazing.

But, I think, just as important are the off-system real-time capabilities. I wonder if you could say a little bit more about what your customers are asking for there, and what you’re providing. What do you see as being new, in terms of having that time-coordinated computing?

Christian Eder: The big advantage of the time synchronous network is that you can utilize your existing Ethernet infrastructure, or you can at least use the cables that you have to upgrade some switches. In a nutshell, you have a standard Ethernet cable, and you reserve part of the bandwidth of this cable for real-time traffic.

We’ve done a demo at trade shows where we have a traffic generator, which can really overload the cable. And in parallel we’ve reserved about 20% of the bandwidth—let’s say it’s 800 kb here, just for normal traffic, let’s say, streaming videos. And for the real-time control to communicate with the other robots, things must be in real time.

There was a reserved channel bandwidth of about 200 kb. And no matter how much streaming traffic we put on to it, there was no really recognizable jitter or delay. It just went smoothly through it, while the other channel was completely overloaded and the video was no longer running, because the channel was so full.

Getting A Quick Start with Single Board Computers

Kenton Williston: How can developers and engineers get started most quickly and effectively in taking advantage of all these new capabilities. What would you recommend?

Christian Eder: If you want to start working with Elkhart Lake or with the new Atom series x6000, the easiest way is to do it on a single-board computer. We have implemented this on a quite tiny PicoITX board, which is just 72-times-a-hundred millimeters, with two Ethernet ports on it. It’s just plug and play; you can start immediately. Of course, we offer this also in other form factors depending on customers’ experience or on their design history.

Kenton Williston: What are some of the target applications that you think these solutions would be particularly well suited to?

Christian Eder: There are a lot of use cases in the medical environment, but also some things you don’t think about—in the gaming industry, or even in the audio industry. You see these things all over the place, when it comes to graphic outputs—something like digital signage in trains, in the airports, whatnot. There are graphics capabilities, and the high resolution of this Atom is quite helpful.

Also, the low power consumption is always helpful in each and every environment. So, the beauty of the computer module is that everything compute-oriented is there, as well as the customization to the single applications or business segments that have happened on the carrier board. And this is absolutely flexible.

Taking a Look at Tiger Lake

Kenton Williston: Intel has also announced their latest and greatest in the Core series, the Core 11—also known as Tiger Lake. Can you tell me what’s new with Tiger Lake?

Christian Eder: Congatec is a very industrial-oriented company, so the biggest thing is the industrial use case here. It’s the first time that we have Intel Core processors that are fully specified for -40 up to +85 centigrade. This wide range—extended industrial, or whatever you want to call it, temperature range—is, of course, on top of all of the architectural and performance levels. This is, for us, the most important point.

Kenton Williston: I’ve been seeing reviews of the Tiger Lake, 11th Gen Core family, from the consumer side of things, and people have been very, very impressed with the performance they’re getting out of the graphics engine—really citing it as a huge leap in performance from the previous integrated graphics solutions. But it feels to me like, in a lot of ways, these two platforms—Elkhart Lake and Tiger Lake—are both culminations bringing together a lot of different important technologies, that individually may not be that exciting, but together feel like they add up to a pretty dramatic set of improvements. Would you agree with that?

Christian Eder: Absolutely. It’s a major step on the low-power side with the new Atom, and in the higher power envelope, the higher performance level, with 11th Gen first-time industrial. Also having all of these on modules you can upgrade and bring to applications very fast.

And this is the whole idea behind Congatec—to bring this technology very simply and easily to the customers. Because the most important thing nowadays, I believe, is the time to market. So the faster or the better we can support a customer, the faster the application will be in the market and the more successful it will be for the customer and for Congatec.

Kenton Williston: Is there anything you’d like to add?

Christian Eder: I think with these two launches we have a complete refresh of the whole platform. And I’m pretty sure each and every customer will find the advantages to stepping up to this new technology and performance level.

To learn more about the latest Intel Atom and Intel Core processors, listen to our podcast on Elkhart Lake and Tiger Lake Revealed.