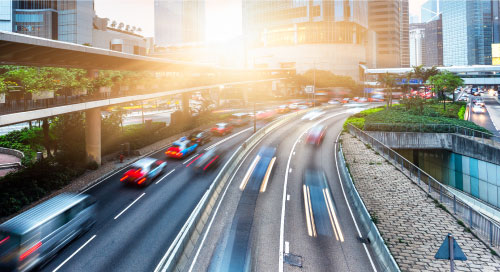 As thousands of Washington, D.C. drivers headed to Arlington National Cemetery for the Armistice Day ceremony, they found themselves stuck in the world’s first traffic jam. On November 11, 1921, the congestion trapped motorists in their cars for hours—along with one very displeased President Harding, whose limousine had been caught up in the middle of it all. People were frustrated, tired, and unaware that they were making history.

Just 100 years later, urban traffic chaos persists. But AI traffic management systems may offer a new solution to this century-old problem, while at the same time addressing the sustainability challenges of the future.

There are good reasons why cities have struggled to solve traffic management challenges.

In an ideal world, urban planning would save us from our traffic woes. But in historic city centers, where the road layout is inherited, this approach isn’t feasible. That’s especially true in emerging markets, where many streets are old and narrow, budgets are limited, and other infrastructure priorities take precedence.

Technological solutions have limitations as well. Loop detection systems are a help, but they’re basically just car counters. They can’t provide the kind of detailed data needed to model and predict traffic. Cloud-based traffic management systems are somewhat better, but suffer from latency issues that make them unable to adapt to sudden changes on the road.

“The crux of the problem is that traffic flow is inherently unpredictable,” says Jonny Wu, Senior Director of AIoT at Ability Enterprise, a manufacturer of edge AI smart cameras. “The bottom line is that if your solution can’t adapt to traffic flow changes in real time, it’s going to be suboptimal.”

AI Traffic Management: A Synergy of Edge and Cloud

The application of edge AI technology to traffic management has opened up new possibilities. In itself, edge computing isn’t new. It was first used in the 1990s to improve web and video content delivery. But processors are now powerful enough to handle the kind of computational heavy lifting needed for AI at the edge.

In practice, this means that AIoT cameras like Ability’s can do a lot more than just count cars. They can identify different vehicles by type, use license plate recognition to track individual cars, calculate journey times, monitor changes in direction, and detect queue fluctuations at intersections.

And that’s a game changer, because this is exactly the kind of granular, real-time data you need to model, predict, and optimize traffic flow.

In an AI traffic management system, data is captured and processed on the edge and then sent to the cloud for additional processing. In the cloud, the historical traffic data is used to model flow dynamics. An AI optimizer then runs simulations to create an optimized traffic control plan.

The plan is pushed out to traffic signal controllers in the field, where the edge AI cameras monitor the flow of traffic and send data to the cloud for ongoing optimization. If necessary, the AI system will automatically adjust the traffic control plan in real time to adapt to changing conditions.

“#Edge #AI isn’t a replacement for the #cloud—but computer vision on the edge, together with cloud AI optimization, offers a solution that’s more than the sum of its parts.”—Jonny Wu, Ability Enterprise.

It’s this combination—AI on the edge and in the cloud—that makes the system work. “Edge AI isn’t a replacement for the cloud,” says Wu, “but computer vision on the edge, together with cloud AI optimization, offers a solution that’s more than the sum of its parts.” (Video 1)

Ability’s Malaysia implementation is a case in point. The company’s AIoT cameras were deployed in the city of Ipoh, on a busy stretch of road that suffered from heavy traffic congestion.

“It’s a series of four intersections right in the center of Ipoh,” explains Erwin Yong, Director of LED Vision, Ability’s partner in Malaysia, “so we’re talking about a part of the city where it’s basically impossible to widen the road.” Compounding the problem: Three nearby schools were causing traffic buildups during student drop-off and pickup times.

Ability and LED Vision installed 12 cameras across the four intersections. After an initial data collection period, the historical traffic data was sent to a cloud AI optimizer. Once the optimized traffic control plan was fully deployed, the results were striking. Benchmarked against the historical data, as well as Google’s commute time predictions, the system reduced the average vehicle journey time in the area by more than 30%.

If you improve traffic flow, you cut journey time for drivers—and idle time for cars. The obvious benefits are fewer hours wasted in traffic jams and a substantial reduction in carbon emissions. And then there are the not-so-obvious benefits. For one thing, an AI system eliminates much of the human effort needed to manage traffic at busy junctions. Traffic officers are freed up to go where they’re needed most.

In addition, says Wu, AIoT camera systems are versatile: “A camera that you use for traffic management, you can use for other things as well: illegal maneuver detection, speed enforcement, and so on.”

In an era of global climate crisis, cities are looking for new ways to reduce carbon emissions and reach their sustainability targets. Effective, economical, and flexible, AI traffic management systems will be an attractive option to traffic engineers and systems integrators building the smart cities of tomorrow.

Traffic management may be an old problem. But thanks to advances in AI, the future is looking bright.