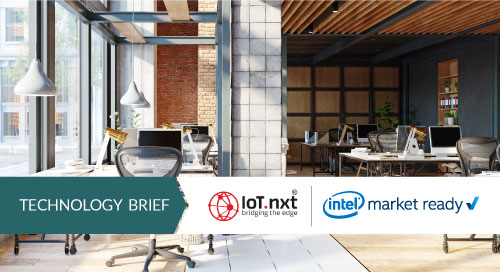 “We’re seeing a massive shift toward sustainability and efficient space utilization,” says Zahir Mamoojee, Vertical Business Lead for Digital Buildings at IoT.nxt. The sustainability drive has led to a strong push to adopt smart buildings, but for many owners, the path to smart buildings is filled with stumbling blocks.

The problem is a hodgepodge of separate controllers for HVAC, lighting, plumbing, and other services. Produced by different manufacturers, these systems don’t work together to provide owners the meaningful insights they need to boost efficiency. According to Gartner, just 29% of real estate leaders feel they have an accurate picture of energy and space management.

Without a comprehensive way to manage energy and correlate it to building usage, owners can’t make sound planning decisions. They waste money running air conditioning in empty rooms, place desks in awkward locations, or create meeting spaces no one uses. The latest technologies, such as AI and smart sensors, excel at solving problems like these, and owners know it. Many would love to have modern, centrally managed buildings, but balk at ripping and replacing expensive infrastructure.

The Move to Smart Buildings

The alternative is uniting the information from a building’s systems to create a coherent whole. It’s a tall order because manufacturers’ operating instructions don’t speak the same language.

For IoT.nxt, a digital and hardware platform company, harnessing data in the diverse building environment is a key capability. “The trick is being able to integrate the protocols. That’s our secret sauce, and it allows building owners to connect to the IoT at a fraction of the cost,” Mamoojee says.

To build its unified Smart Building Solution, the company adds data-collecting sensors to existing systems ranging from HVAC and lighting to mechanical and refrigeration. It displays all information on a single software platform that owners and managers can control from a computer or a mobile app.

Behind the scenes, sensor data travels to Intel® processor-based gateways. Some information is processed at the edge, allowing managers to respond to conditions in real time and receive alerts. For example, if dangerous levels of carbon dioxide accumulate during a long meeting, a manager receives a warning and can set the app to pump fresh air into the room (Video 1).

“The trick is being able to integrate the protocols. That’s our secret sauce, and it allows building owners to connect to the IoT at a fraction of the cost.” — Zahir Mamoojee, @IoT.nxt

Information that isn’t needed immediately is transferred to a company’s data center or to the cloud, where AI algorithms reveal trends and spot looming problems that can be fixed before causing costly shutdowns. For example, if an elevator’s doors start closing more slowly than they should—a problem that often leads to failure—data normally sequestered inside the elevator’s programmable logic controller shows up on the IoT.nxt platform. Building managers learn of the problem before it’s perceptible to the human eye, and can schedule repairs before the elevator quits.

Connecting the dots of building systems in this way puts aging and newly constructed facilities on a more level playing field. “Today’s building management is data-driven,” says Terje Moen, Co-founder and Chief Marketing Officer of IoT.nxt. “With our solution, you can have a 20-year-old building that provides exactly the same levels of actionable information as a brand-new one.”

What a Smart Building Reveals

Companies are sometimes surprised at how quickly an IoT system can be assembled. Vodafone had been struggling for years to integrate systems at its London headquarters, but in three weeks, IoT.nxt connected:  HVAC, several subsystems, and the company’s existing environmental sensors to its platform, adding occupancy and thermal sensors.

Though less than six months old, the solution is already generating valuable insights. For example, the company learned that on Fridays, the building has only half as many people as other days. “They could shut down three floors on Fridays, saving on cooling, heating, lighting, and other services,” Mamoojee says. With occupancy restricted during COVID-19, Vodafone hasn’t yet calculated its energy savings with the new system, but Mamoojee says most companies cut bills by 20%.

Like many companies, Vodafone is currently using occupancy data to prove social-distancing compliance. But after the pandemic, businesses will realize the additional value the sensors bring to space planning, Mamoojee believes. “If you have 10-seat meeting rooms, but data shows that 80 percent of the time only five people are there, you can use smaller rooms and save energy,” he says.

Likewise, infrared thermal sensors used for Covid detection can reveal not only whether people are ill, but which areas of a building they congregate in and which are underutilized. After the IoT.nxt platform revealed workers were ignoring a wing on one floor, Vodafone notified the building manager, who may reconfigure the space for a new purpose.

The system is highly customizable and can be connected to practically any building service. Some firms measure water consumption and building security. Restaurants and caterers monitor air and refrigerator temperature to comply with safety standards. Data centers use the platform to track cooling, power consumption, and server health. Telecom company Vodacom uses it to keep a close eye on the functioning of 8,000 cell phone towers.

Building owners can manage data for a single building, multiple sites, or geographic regions, combining and segregating it for different purposes. For example, a school system in Florida that previously used a blanket system to control energy adopted the IoT.nxt platform at six sites to enable more granular controls.

Now, schools with different hours and energy systems can adjust settings to their own needs. When occupancy sensors revealed some buildings were running air conditioning on weekends, when no one was there, a shutoff produced an immediate 15% cost savings.

“An automated solution gives people many choices for creating an adaptive working environment,” Moen says. “By bringing data together and real-time monitoring, companies can save money, achieve sustainability goals, and make their buildings healthier and happier places to work.”