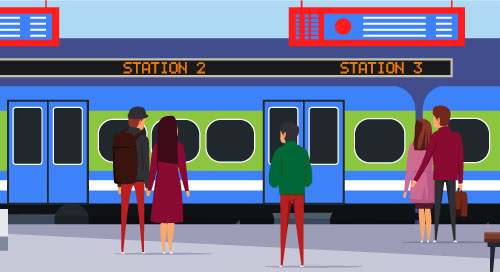 Project leaders designing Moynihan Train Hall, part of New York’s iconic Penn Station, set out on a unique mission: to convert a 1913 neoclassical-style building into a train station suited to 21st-century passengers. As one of the world’s busiest transit facilities, it has been transformed into a modern civic icon.

An essential part of the station’s rejuvenation was to suit the needs of today’s tech-savvy travelers. By providing the real-time information they needed, it lets people quickly find their way around the station and surrounding city. The solution was 3-D interactive wayfinding—giving travelers streamlined access to diverse content.

Wayfinding screens and kiosks needed to be accessible via mobile devices and voice command, and support real-time GPS. At the same time, the system’s content management platform (CMS) had to be easy to update with custom content, pertinent announcements, advertisements, and even entertainment.

On top of all this, the project managers needed a short turnaround time from planning to implementation. To achieve these objectives, the Moynihan Train Hall team connected with digital wayfinding pioneer 22Miles.

Using the company’s low-code platform—a drag-and-drop environment with open APIs—allowed them to complete a customized project in just three months. “With our content management system, you’re not creating anything from scratch,” explains Tomer Mann, Executive VP and Global VP of Sales at 22Miles. “You’re leveraging an existing software platform that can do things a custom design firm would spend millions of dollars to do.”

While the solution’s low-code CMS allows designers to set up a new system quickly, it also includes layers of customization and the capability to draw in assets from multiple data sources.

In the case of Moynihan, the design team was able to import and incorporate the location’s existing signage and directory assets from disparate systems and file formats, saving time and effort. Once that foundation was laid, they filled in the rest of the needed solution around it (Video 1).

“All you’re doing is dragging your media files into a formatted layout, greatly reducing the time to implementation because all of those widgets are already in one platform,” says Mann. “The platform can host third-party media components and data feeds such as MP4s, XML files, JSON, and SQL, and create the UX very easily from there as a drag-and-drop system.”

The solution is also hardware agnostic, allowing customers to leverage existing assets, no matter the display orientation or resolution.

The Moynihan project incorporates Intel® processors to run the 3-D engine. “They really wanted 3-D models, not just a map,” Mann says. “If you zoom into the Moynihan model, you can see the stairs, pylons, and other features. To achieve that level of detail, you really need high-performance CPUs, so we leveraged the small but powerful Intel® NUC.”

Twelve 4K #interactive displays are positioned throughout @MoynihanTrains, offering visitors a range of #travel information on flight and train status, routes, destinations, and interactive maps of the facility. @22miles via @insightdottech

Twelve 4K interactive displays are positioned throughout Moynihan Train Hall, offering visitors a range of travel information on flight and train status, routes, destinations, and interactive maps of the facility and the surrounding New York area. With pandemic-era hygiene in mind, wayfinding displays installed in Moynihan include a “touchless touch” option for users to scan a QR code and control the screen using their smartphones.

The solution’s analytics system reveals how many visitors use each kiosk, which destinations they choose, and the keywords they seek.

“Site managers wanted to understand the usage, helping them evaluate the reach and effectiveness of each display and understand which destinations are most popular,” says Mann. “They’re able to take those data as a log and put it into other KPI systems as needed so they can make adjustments to content and display locations as needed.”

From start to finish, the Moynihan Train Hall 3-D wayfinding and digital signage system took about 12 weeks to develop. “They wanted to do it in four months and thought that was going to be impossible. They were thrilled with the shorter timeframe we were able to deliver,” says Mann.

Through many partnerships with other hardware and software providers and a drag-and-drop CMS that easily pulls in existing assets from other formats, 22Miles allows systems integrators and customers to bring solutions to market much faster—and incorporate a wide range of additional functions.

For example, the solution is compatible with edge devices and sensors, so some use cases incorporate occupancy and density grouping controls in agile workplace environments. It can also manage room booking, hoteling, and hot desking using interactive digital displays, and function with security cameras that detect user demographics to deliver customized content. In some wayfinding use cases, the solution connects kiosk users with a “virtual receptionist” — real human help at a distance.

“We’re always innovating and adding more capabilities based on what our clients and partners are asking for,” says Mann. “Partners don’t just view us as another vendor; they see us as equipping them to support all of their client needs. Whether it’s through one-on-one consultations, our webinars, or other resources, we’re focused on providing value for other third-party vendors, partners, and system integrators — and we’re always happy to build more relationships.”

Revitalizing Penn Station has been a longtime vision of New York City and state leaders. It is a cornerstone in also revitalizing the neighborhood and driving sustainability. Building 21st-century infrastructure includes 21st-century technology—creating a platform for the future.