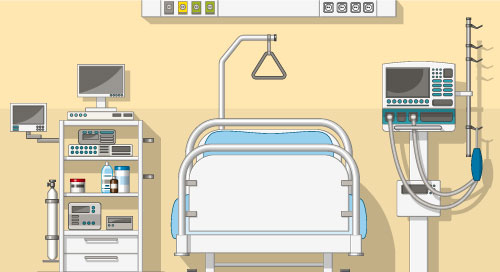 One example is the ventilators that provide artificial respiration, delivering oxygen to patients unable to breathe on their own. The COVID-19 pandemic has been driving an instantaneous demand for ventilators in hospital intensive care units (ICUs). But regardless of the need for speedy deployment, safety-critical systems must still adhere to safety standards.

Functional safety (FuSa) involves operating correctly—or failing in a predictable (fail-safe) manner—in response to a wide variety of scenarios. These include problematic input signals such as human errors, hardware failures, software glitches, and stress caused by environmental and operational conditions. To address these issues, safety-critical systems must comply with complex FuSa standards like IEC 61508 and ISO 13849.

A Safety Island for FuSa Compliance

The latest Intel Atom® x6427FE and x6200FE processors—previously known as Elkhart Lake—provide designers of safety-critical systems with enhanced features that simplify FuSa-capable designs combined with multicore high compute performance. This provides the ability to consolidate both safety-related and not-safety-related workloads in a single platform.

In addition to the FuSa features integrated in the Atom x6000E processors and orchestrated by Intel Safety Island, the Intel® SoC supports works in conjunction with networking technologies like Ethernet time-sensitive networking (TSN)—bringing deterministic, real-time communications to functionally safe IoT deployments. This matters because TSN determinism is important in FuSa applications where a complex distributed processing environment must work in a synchronous manner.

Even while facing time-to-market demands, developers must take into account the need for future-proofed designs to meet the increased computational requirements of new and evolving applications. One solution for equipment manufacturers who want to ride the wave of an increasingly competitive marketplace is to adopt a strategy based on Smart Mobility Architecture Computer-on-Modules (SMARCs or SMARC COMs).

Unlike a traditional single-board computer, a SMARC COM is not designed to use standard connectors for input/output peripherals to be connected directly to the board. Instead, the SMARC COM is plugged into a carrier board, which contains any additional components and subsystems. This allows it to provide the core compute capabilities, while the carrier boards provide the “secret sauce” that allows system designers to differentiate their products from competitive offerings.

The ability to replace one industry-standard SMARC COM with another while keeping the same carrier board allows scalability, fast time-to-market, and upgradability—while maintaining low costs, low power, and a small footprint. And using industry-standard SMARC COMs enables second-source options that are simply not available with proprietary designs.

When creating safety-critical products, leading embedded hardware manufacturers like SECO package the safety and security of Intel Atom x6000E processors in SMARC COM modules, such as the SM-C93 (Figure 1).

“Increasing demand on performance and connectivity is particularly challenging due to the additional design impact related to functional safety constraints,” says Lorenzo Veltroni, HW R&D Manager at SECO. “In principle, this affects both integration and certification. This is the great benefit of the SECO SMARC module: being able to provide functional safety on a small factor.”

Marco Sogli, Head of Software R&D & DevOps at SECO, adds, “With the Atom x6000E-based, many FuSa features are ready to use and easily certifiable as they come from Intel. In this way, the SM-C93 helps reduce complexity and shorten development time to as little as six months.”

By including qualified FuSa components directly in the SMARC module, alongside complete documentation, SECO makes it easier for customers to more quickly pass the IEC 61508 and ISO 13849 certification process.

“In the healthcare industries, applying FuSa standards can enable healthcare and biomedical machinery to prevent dangerous situations,” says Veltroni. “In these scenarios, detecting failures and anomalies can help prevent injury to patients and users.”

But Atom x6000E processors with FuSa features—and systems such as the SECO SMARC module—apply to use cases well beyond healthcare. They are applicable to a wide range of safety-critical and mission-critical applications, including industrial control, robotics, transportation—and the list goes on.

For example, SECO is now working for further integration of its SMARC Module for an industrial application. “Keeping workers and the environment safe is a key priority when designing automated equipment and processes,” says Veltroni. “And in this environment, functional safety is the technology needed to remove unacceptable risks in the presence of possible fault. The Intel Atom x6000E is key to making this possible.”