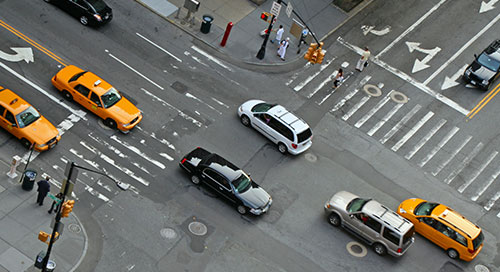 After a credit union in Louisiana was robbed, the local authorities were able to track the route of the thief using automatic license plate recognition (ALPR). A camera about a mile from the bank was able to spot the thief’s vehicle.

But that’s just one example of what this technology can do. AI at the edge brings lots of possibilities beyond catching thieves. For example, it can help cities identify unlawful garbage dumping or illegal construction sites.

ALPR can locate shared bikes and scooters littering sidewalks. And as cities create dedicated bus lanes—closing streets to cars—it can also play a role in spotting vehicles that are illegally parked.

To make this type of detection a reality, you need technology with machine learning (ML) capabilities.

“When we were starting to design the next-generation ALPR systems, we looked at the technologies and trends out there,” said Chris Yigit, Program Manager at Genetec. “There were limitations in trying to run ML inference on a generalized processor. We started using the Intel® Movidius™ VPU, and that’s when we realized how powerful the technology is.”

Movidius powers the Genetec AutoVu SharpZ3, a mobile ALPR system built on a state-of-the-art deep neural network architecture. The VPU’s computer vision and ML algorithms make new capabilities, such as situational awareness, possible. In fact, it enables ML capabilities that are 50 times more powerful than a standard CPU, according to Yigit.

Even though its previous-generation ALPR device has high raw read rates of up to 99 percent, it had reached its limitations as far as the ability to run ML algorithms.

Movidius reduces the amount of power the SharpZ3 requires. “We need low-power solutions because we build vehicle-based systems, and not all of them are beefed-up squad cars with a super alternator,” Yigit said. “The VPU provides a sweet spot between high processing capabilities and low power.”

The system includes three optical sensors, which enables it to identify the position of objects near a vehicle. Traditional LPR cameras typically have just two sensors, one for reading license plates and the other to snap color pictures for additional context (Figure 1). The SharpZ3’s third sensor also allows for stereoscopy to provide an illusion of depth in an image. This means it can better pinpoint the location of an object like a scooter or suspicious package.

The additional sensor lets the ALPR device better focus on the objects it can read and to detect a variety of conditions–even cracks in the sidewalk. Stereoscopy combines with GPS technology for dead-reckoning navigation to calculate a position based on speeds that have elapsed over time.

There’s a big cost advantage to doing the learning on the edge, because sending data for processing in the cloud is expensive. @genetec @insight.tech

Edge computing delivers cost savings for first responders and other users. Collecting data from ALPR and deep-learning technology at the edge is less expensive than processing images in the cloud.

“There’s a big cost advantage to doing the learning on the edge, because sending data for processing in the cloud is expensive,” Yigit said. “That’s our differentiator at this point.”

In addition, by incorporating the Movidius VPU, the Sharp Z3 can offer improved bandwidth and analytics capabilities without requiring a second set of hardware.

Edge inference, which involves using an ML algorithm to make a prediction, is less expensive than processing the images in the cloud. It also boosts license plate read speeds versus earlier ALPR iterations. “The edge inference hardware has really given us plenty of bandwidth, several times more than we ever thought possible with the previous generation,” Yigit said.

Incorporating these algorithms in an ALPR mobile device brings a new level of analytics that goes above and beyond just identifying a vehicle and what type of vehicle it is.

For example, Genetec is working with one city to identify construction projects. “Their goal, as soon as they identify a construction site or roadwork that’s taking place, is to be able to figure out if that particular contractor has the right permits, and if not, flag it as a potential violation of the law,” Yigit said.

More in Store with Machine Learning

Incorporating ML, three sensors, and other innovative technologies means that ALPR devices can offer even more use cases. For example, geofencing can help cities improve their curb management by figuring out where vehicles are misplaced or improperly stored, and take corrective measures.

Currently, the technology enables parking attendants to spot illegally parked vehicles, but going forward, ALPR technology will also be able to detect autonomous vehicles, or ones with too many passengers.

“When we look forward at things like autonomous vehicles and vehicle-to-vehicle network communications, we don’t know what problems will arise in two, three, four years from now,” Yigit said. “These types of applications, many of which we haven’t even discovered, will become more and more prominent on the horizon as we start to unleash the power of ML.”