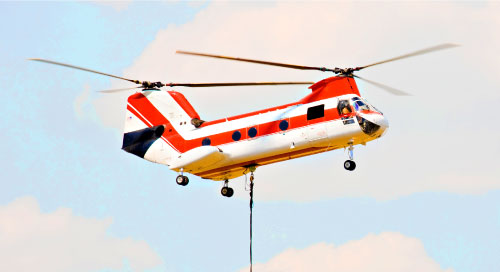 The Columbia Vertol 234 heavy-lift helicopter is used in emergency response and aerial firefighting operations around the world. The aircraft can carry up to 51,000 pounds of water or other flame retardants to wildfires up to 850 nautical miles away.

Despite its vast capacity, in the design of aircraft like the Vertol 234, every ounce matters. With each onboard system and component, aerospace engineers trade range, payload size, or both, which can be the difference in traveling hundreds of miles to make an additional pass at a fire line.

Computational resources come at the ultimate premium in any aircraft. Size, weight, and power—known as SWaP—often dictate which electronic systems are included, and which ones are left behind.

“You might have a communication system,” says Aaron Frank, Senior Product Manager at Curtiss-Wright, a leading supplier of airborne electronics. “You may also have a separate system performing mapping or mission processing. And you may have additional systems dealing with GPS and radar. Typically, these have all been separate boxes which are put into an aircraft. That’s because each system is developed separately and uses all the available processing power to implement those applications.”

Virtualization technology can reduce these SWaP tradeoffs by allowing multiple independent functions to be consolidated onto one system. But it requires a level of compute performance that has not been easily accessible to avionics engineers until now.

Today, increasing demand for functionality in modern aircraft is driving a critical need for virtualized avionics systems that combine separate capabilities into a single ruggedized and compact computer. New advances in the 11th Gen Intel® Core™ vPro®, Intel® Xeon® W-11000E Series, and Intel® Celeron® processors (previously known as Tiger Lake H) support these designs, and do so without sacrificing functional safety or determinism.

Increasing demand for functionality in modern #aircraft is driving a critical need for #virtualized avionics systems. @CurtissWrightDS via @insightdottech

Expanding Virtualization on a Single Device

Virtualization and the concept of running multiple applications on a single piece of hardware is not new. In fact, Curtiss-Wright and other aerospace electronics suppliers have used virtualization for years. But it hasn’t been effective in aerospace systems for two reasons:

The 11th Gen Intel® Core™ vPro®, Intel® Xeon® W-11000E Series, and Intel® Celeron® processors address these issues in multiple ways, starting with sheer performance enhancements. “Octal-core processors mean that instead of just using virtualization for one or two processes or applications, you can run three, four, five, six applications on the processor and still get very good performance,” Frank says.

The platform also adds significant performance improvements via new instruction sets designed for the complex math operations of signal processing applications like radar, as well as applications where AI and ML is applied in aircraft systems.

Curtiss-Wright’s single-board computer—the 6U VPX6-1961—was designed around the Intel® Xeon® W-11000E Series processor, which incorporates so much performance in its eight CPU cores that fewer modules are needed per system. This translates into direct SWaP savings, as new capabilities like AI and ML can run simultaneously on the same VPX6-1961 board as other applications, instead of on a separate CPU or GPU card, or a whole other discrete system.

Advanced virtualization features on the new Intel platform are key to executing tasks like AI/ML inferencing alongside mission-critical avionics applications on the VPX6-1961. The hardware-accelerated nature of these technologies also helps offset overhead incurred with virtualized workloads, which even extends to connected devices:

Once implemented, the benefits of virtualization continue presenting themselves on the functional safety front. Because virtualization support is rooted in the Intel processor, it’s easier to robustly partition applications or data running on one core from another. This includes different blocks of legacy code from a formerly discrete system that may already have been safety certified.

This streamlines system traceability and compliance to functional safety standards, which helps accelerate time to market. To further assist in this process, these processors are also backed by the Intel® Functional Safety Essential Design Package (Intel® FSEDP), a TUV-qualified tool for gathering and documenting safety artifacts that span the entire solution stack.

Curtiss-Wright has taken full advantage of the gains Intel’s latest CPUs provide, but the advantages don’t stop there.

End users of avionics systems based on the VPX standard may be able to consolidate their equipment today by dropping in the backward- and pin-compatible VPX6-1961 into existing chassis and removing single-function solutions. Because the solution is standards-based and capable of hosting legacy code in securely partitioned containers, compliance headaches should be minimal.

Now, everyone from engineers maintaining legacy systems to designers of next-generation aviation systems have a smooth runway for making every ounce matter.