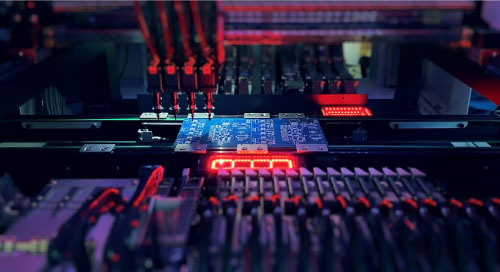 You’re working away at an important project when an email ping interrupts you. After you read the message and respond, it takes a while to get back into the flow of things. As it turns out, humans are not the only ones who struggle with the inefficiencies of task-switching—machines do, too. And as manufacturing increasingly accommodates more small-batch production, task-switching is becoming a problem.

It used to be that manufacturing was mostly dedicated to stamping out large volumes of the same product. But in the age of increased customization and quick turnarounds, this kind of low-mix, high-volume manufacturing is making room for the opposite: small batches of specialty goods referred to as high-mix, low-volume manufacturing.

Kenny Chang, VP of Edge AIOT Product BU at ASRock Industrial, an IoT edge solutions OEM, has seen that manufacturers will produce maybe 200-500 units of certain kinds of computers, for example, instead of hundreds of thousands.

When manufacturers must frequently “task-switch” from one kind of product to another, associated jobs such as automated optical inspection (AOI) suffer. It takes time to set up the computer vision system after every lot and relearn what to look for, Chang says. And traditional AOI is difficult to calibrate.

“It’s black-and-white and doesn’t learn as you go along,” says James Lee, President at ASRock Industrial. If you set up the pass margins at a low bar, more defective products can sneak through. On the flip side, if the margins are too high, then practically every widget raises the alarm and requires a human operator to reinspect.

Those human operators are not easy to come by. Many countries around the world, including Taiwan, where ASRock Industrial is headquartered, face labor-related challenges, says Lee. “A shortage of labor is going to be a growing problem, especially in countries with aging populations,” he says.

AI at the Industrial Edge

AI at the edge solves the problems related to manufacturing’s labor and business operations by automating repetitive processes. AI is a good fit for the AOI process and the model, unlike its static traditional counterpart, improves continuously, learning to fine-tune its inspection pass-and-fail standards along the way.

But AI AOI implementation as part of factory automation faces its own challenges: AI is popularly developed on the Linux operating system, while most manufacturers traditionally use Windows-based software for their industrial applications.

This often means running two industrial PCs (IPCs) side by side or dealing with the complexities of virtualization to run operating systems on a single system. In either case, running two different operating systems and passing data back and forth creates bottlenecks in production lines. So, ASRock Industrial collaborated with Intel and Microsoft to develop an optimum configuration. The Edge AIoT Developer Kit, which enables manufacturers to use one Windows machine to do all AI AOI-related tasks.

The Industrial Edge AIoT Developer Kit comes preinstalled with Intel® Edge Insight for Industrial (Intel® EII) running on Microsoft Azure IoT Edge for Linus on Windows (EFLOW). EFLOW uses hypervisor technology to consolidate the Linux and Windows workloads and run it all on one Windows machine. “Another benefit of EFLOW is that it can connect to Microsoft Azure via its built in Azure IoT Edge to bring cloud services” says Tou-Wen Hsieh, VP of the Software Division at ASRock Industrial.

“The prepackaged kit also comes with three demo boards that can be used to demo the defect detection,” says Sam Chiu, Product Manager at ASRock Industrial. The plug-and-play kit can identify good for passing and two types of failure: misplaced/missing jumper or capacitor. Systems integrators and their manufacturing customers can use this proof-of-concept as a starting point.

“When #MachineLearning is achieved, the #production capacity can be increased with greater accuracy and decreased labor costs” – Sam Chiu, @AsrockComputer via @insightdottech

The Advantages of Next-Gen AI AOI

“When machine learning is achieved, the production capacity can be increased with greater accuracy and decreased labor costs,” Chiu says. The ASRock Industrial kit enables AI application of AOI at the edge and improves accuracy and efficiency of production operations, he adds.

The workload consolidation that the Edge AIoT Developer kit offers is useful in another especially important way: “There are more than 900 million devices using Windows 10, so it’s an ecosystem we cannot ignore,” Chiu says. “By using our solutions, customers can continuously use their [Windows-based] legacy software and devices.” The Windows machine simply plugs into existing infrastructure and saves on the costs of operating two different systems. “This is ideal for the marketplace user who wants to control the cost of ownership of AI AOI,” Chiu adds.

A manufacturing company that produces motherboards for ASRock Industrial is test-driving the AI AOI solution. The company has struggled to integrate the business IT and OT components together and maintain consistency in the inspection process. Early results have been promising, Chang reports.

With next-gen AI AOI, manufacturing can conduct accurate and standardized inspection in real time, no matter the type and size of specialty lots. Thanks to edge AI and ASRock Industrial’s plug-and-play Edge AIoT Developer kit, production can task-switch easily, improve inspection accuracy, and speed, all while optimizing labor costs. By meeting manufacturers where they’re at with their legacy systems, ASRock Industrial is doing its part to make AI easier to adopt and democratize digital transformation.