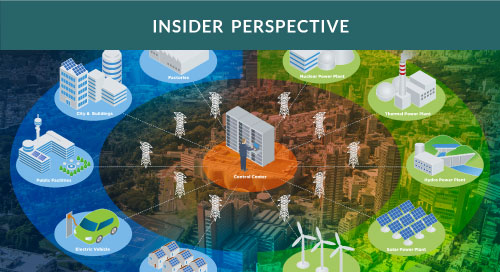 The power grid is undergoing massive changes with decarbonization initiatives and the fight against climate change leading the way. The need to digitize the power grid is more important than ever as it can help move forward and accelerate these efforts.

But government regulations, emerging security threats, and the need for renewable energy are putting a strain on the grid.

We talk with Jani Valteri, Technology Center Manager for ABB, a leader in industrial digitalization, to discuss the ongoing evolution of the power grid, key considerations for modernization efforts, the role government regulations play, and what this means for the industry.

How has the power grid evolved over the past couple of years, and what drives those changes?

During the past couple of years there have been more changes than in the previous two decades. One big driver is the decarbonization of our society and fighting climate change. It is, of course, one aspect that addresses all parts of the society, and electrification of our society is one big tool to really support in this, because electrical energy is one of the few flexible forms of energy that can be produced with zero carbon footprint.

We also see new active components connected to the grid. It may be energy storage. We have started to see electrical vehicles and other similar components.

On top of that, one key thing is digitalization, which is really giving a lot of speed for this change and making it possible for change to happen at quite a fast pace.

What do you see coming next in the grid?

Many powers are pushing toward individual consumer behavior and government regulations. On the other hand, we are starting to see more mature technologies coming.

There is also a flavor of unpredictability. Whatever we now predict for the next five years, I expect the change to be even faster than that. And that’s another reason why we really need to take digital technologies very seriously, because they are the only technologies that are flexible enough to really accommodate this and make this transition happen in a smooth and reliable way.

What are governments and other regulatory bodies doing to modernize the power grid, digitalize it, and make it more flexible?

Multiple things are happening on different fronts. Just during the past couple of months we’ve seen different kinds of governmental investment packages and financing schemes directly focusing on clean transition and digitalization.

The technology is also getting more mature.  Virtualization is one example. It is now mature enough that it is being used in the energy sector more.

What does virtualization mean in this context?

The primary are these switches and power transformers and the devices that integrate either opening the circuit or closing the circuit—transforming the energy from one form to another. The secondary system is the intelligence part on top of it, which is monitoring all the time to make sure things are in order or if there’s a fault that you need to react to.

The secondary system, this intelligence layer—that is an area where the software orientation is growing very rapidly. There’s a history of having a lot of separate, smaller devices with some level of intelligence. Now we see a trend toward having more standard devices where the customization is done more on the software level.

We see the introduction of more PC-like technology, or industrial computing technologies. Then, on top of that, we see a trend of going from bare metal or these kinds of native software solutions toward more virtual images that can be run in many places.

It is really separating the physical and digital world even more, and then giving much more freedom to quickly react to any kind of change that may happen.

Can you provide a practical example of what you’ve done with some of your customers to implement this kind of technology?

One example is the discipline substation. In traditional formats, have multiple different protection relays doing specific protection functionality for a specific component. We made a pilot where all this functionality was put into one device as a pure software product that we then could update in real time without making any changes on the physical level.

We have multiple kinds of pilots where we really go from multiple separate devices into one—or two if we want redundancy—where all the customization is done; the software and the hardware are always the same.

What is the importance of the substation?

As we see society getting more and more dependent on electrical energy, it’s even more important that the substation is in a very good shape and performing well, having a very good and elegant selective protection and performing optimally.

Do you see the function or the role of substations changing significantly as we move forward?

I don’t see a dramatic change in the role. I see it more as an emphasis of the role and then a growing of the role. It has been an important part of that already earlier, and we see that it will remain very important.

How do you see cyber threats evolving, and what should the industry be doing to deal with those threats?

We want flexibility. We want digitalization. We want remote-update ability and remote reconfigurability. All this needs to be very cybersecure, but how? One way is to participate very actively in standardization’s latest activities.

We have increased our research and development efforts, increased a lot of testing, bringing new technologies into use. The update ability and flexibility of the system is giving tools, in the sense that whenever something happens, or we notice some need for change, we can deploy cybersecurity improvements all over the network at a very fast pace.

We need to increase the awareness and then share best practices, and really have a solid working model in different places. Often the technology takes you only so far, but then you need certain, let’s say, personal guidelines and rules that people really respect and that go according to certain guidelines. And then keep the cybersecurity on the high level and keep eyes open when the system is used and unsupervised.

Would you say a well-proven foundation is necessary before you can really do anything?

It’s very important that the device and the electronics and the physical reliability are on a high level. It’s not enough to say that you have very reliable hardware, and then you can just put your software on it.

We similarly need to think about software in layers. We need to have a very robust digital backbone, or the bottom level of the software, which is also keeping the software integrity on a high level. Because when we go to this kind of area where we are maybe updating remotely, reconfiguring, doing changes in the live system, which is all the time securing and protecting the network, we similarly need to have a good, layered approach to software, so that we know that certain aspects are robust and reliable, even if some other part is changed.

So it’s bringing quite interesting needs and new requirements only if you want to look at software.

What are some key considerations for modernizing infrastructure?

One important part on the national level, political level, is the governmental regulations. Often, they tend to guide quite a lot on what, for example, utility distribution system operators do or do not do. It’s very important that these governmental regulations are really supporting taking new technologies into use—are supporting innovations—and are not promoting, let’s say, old-fashioned ways of addressing challenges.

Apart from that, it’s important that you are open toward new technologies, but you do it in a very controlled manner with zero tolerance for low quality. And you do it with good partners that you trust that take the security and reliability very seriously.

How has the partnership between Intel® and ABB helped move these solutions forward?

It’s important to think that it’s not just about technology. It’s about the networks. It’s about ecosystems, which are not just technical ecosystems, but business ecosystems. When we see a converging of the IT and energy side, we see utilities and telecom operators getting closer to each other.

It also means that the business landscape is changing, and we will see some changing of roles. We might see some new roles that will manage specific digital aspects of the electricity network, bringing some new digital services to the energy network. It must have a really secure layer so this access can be granted.

I also see that there will be new roles and new kinds of business ecosystems that will further change the game or change the landscape, but also increase the speed, and bring new players that can bring new innovations to the area.

What I see now in the future, when these things get closer together and we see new ecosystems, we also see a rate of change in how the system is set up.

The resilience or protection will also mean how we combine this paradox. How do we give flexibility and adaptability—robustness to the environment—while at the same time allowing maximum flexibility? There are also different kinds of what I call resilience, what we haven’t earlier considered as resilience, but now it will also come.

The meaning of many words will broaden, and the security and resilience will mean a bit more, if you understand what it means today.

Any final thoughts you want to leave our readers with?

My concluding remark is to really make this shift in a good, reliable way. We do need, let’s say, systemic resilience—a systemic approach to keep a system secure—but we also need to have a good, open collaboration.

We have it now with ABB and Intel, and with many other utilities and customers. This is a good path, and bringing a lot of good building blocks for carbon-neutral energy systems.

To learn more about the evolution of the power grid, listen to our podcast ABB Talks Smart Grids, Substations, and Security.