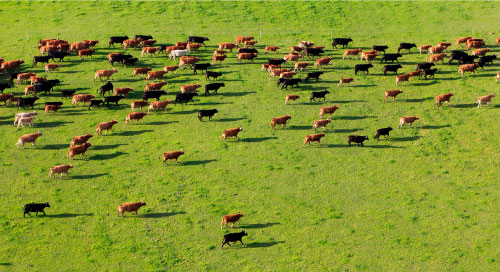 When we think of the Internet of Things (IoT), livestock don’t usually come to mind. Nor do strawberries, fish, medical patients, or volatile gas leaks. But advances in AI-based computer vision and edge computing have made solutions like the “internet of cattle” real, and they’re rounding up true business benefits. Automated management lets protein producers monitor livestock health and location in real time—preventing the spread of disease, mitigating loss, and optimizing breeding and birthing practices.

But integrating the AIoT, computer vision (CV), and machine learning (ML) tools behind the “internet of cattle,” or any worthwhile ML project, can be challenging.

Typically, a video management system connects the cameras and collects data, which ML engineers and data scientists use to create the models. And a whole other set of tools cuts the video frames, labels and trains the datasets, deploys the models, and monitors the models’ accuracy. Then there’s the difficulty of creating a high-quality dataset to begin with.

Sixgill, LLC, an ML lifecycle management provider for AIoT platforms, is making it easier. “What IoT developers really need are tools that are easy to deploy, manage, and adjust—and that don’t require months of heavy development investment upfront,” says Elizabeth Spears, Chief Product Officer at Sixgill. And until recently, those tools haven’t existed.

Machine Learning Doesn’t Need to Be So Hard

When Sixgill saw that the available ML tools were hard to use and implement consistently across teams and enterprises, they knew getting good data was a big part of the problem. Consider a cattle-counting use case.

The model might perform well as long as the cattle look and behave as they did in the images used to train it. But if the images were captured in the summer, what happens when it snows? Or when the cattle are backing up instead of moving forward? The model will start to fail unless it can be quickly retrained to recognize cattle in all their various states.

Building a high-quality dataset that accounts for these kinds of exceptions can be tedious. Data scientists or ML engineers are often tasked with labeling images, or it can be contracted out. But both routes are inefficient and costly. Their expertise can be more valuably used in ways other than building real-time video streaming and automating it with a data labeler, for example.

So why not put the labeling tool directly in SMEs’ hands? “By making data preparation easy and accessible for nontechnical SMEs, they can give crystal-clear examples and bring the accuracy level of the whole project way up,” says Spears. And organizing the data becomes much easier with features like anomaly detection, where new incoming data automatically triggers a prompt: “Do you want to label this?”

Sixgill knew it was possible to develop a streamlined tool that would take any user—engineer, data scientist, or IoT developer—from zero to a fully functional ML model fast. So the company built the Sixgill Sense platform that integrates every step in the image-based ML lifecycle.

The Power of Automatic Object Recognition

The Sixgill livestock management customer initially explored AI for more-accurate livestock counting. The manual process was costing it nearly $90M per year in revenue leakage, but the ML solution a major cloud provider built for it didn’t perform any better—even after one year.

But when Sixgill took over the project, it trained a model to 99.7% accuracy in three weeks—saving the customer an estimated $52M per year. The platform made it possible with:

Sense effectively replaces several inefficient processes. For example, rather than moving data from your IoT devices into a separate labeling tool, with Sense it’s already where it needs to be—a big timesaver when maintaining the model’s accuracy requires continuous experimentation. “With all the data and models in one place, you can iterate on them really quickly,” says Spears.

Sense takes advantage of the power of edge devices and Intel® accelerated ML capabilities. And it makes collaboration easy with a visual UX that caters to data scientists, SMEs, and business users. So tasks that used to be overly complex and time-consuming are reduced to a few clicks, and models can be trained and tested quickly.

“Anyone can build a no-code, end-to-end ML model with video through this platform,” adds Spears. “It’s simple enough for the business user and powerful enough for the ML engineer.” And to give IoT developers everything they need to be successful, Sixgill regularly holds events, offers tutorials, and can provide customized training programs on computer vision and labeling.

The “internet of cattle” is a clear example of the value of tools designed with the end-user in mind. But it’s certainly not the only one. Companies in manufacturing, retail, life sciences, and other industries stand to increase revenue and reduce expenses when they leverage AI, ML, and powerful edge compute.