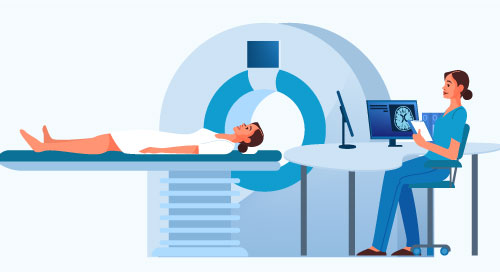 The transition of AI from hospital labs and operating rooms to initial points of care in the field is the next big step for healthcare IoT applications.

Consider an ambulance outfitted with a mobile rugged edge computer. With the right balance of performance and power efficiency, first responders could feed outputs from instruments like portable ultrasounds directly into the computer, where edge AI algorithms analyze the scans for irregularities. Those inferences would then be transmitted wirelessly to hospital physicians while the ambulance is en route, saving valuable time upon arrival that could change patient outcomes for the better.

Equipment like this can unlock a greenfield of opportunities that enhance patient care in countless edge environments ranging from doctors’ offices to rural clinics to pop-up disaster relief efforts.

Traditionally, high-end medical imaging machines­—deployed in major healthcare facilities—analyze a great deal of sensor data. These machines require a lot of computing capability that makes them physically large, very heavy, and power-hungry. They are also quite costly.

Today, most edge devices have limited edge processing capability, which requires transmission of data through the cloud to a data center for analysis. The answer is then transmitted back to the edge device. This process incurs latency and requires a reliable connection that is not always available. It is also impractical and expensive to send large amounts of data in this way. Edge medical devices therefore need their own local compute power, often assisted by AI technology.

These two technical problems are solved by a new generation of microprocessor with expanded raw computation capability, execution efficiency, and wide data movement that is necessary to shrink machine size and lower power draw as a prerequisite for wider deployment.

Rodney Feldman, VP of Business Development and Marketing at IoT solution developer SECO USA, explains: “The traditional edge intelligence computing model doesn’t work for edge medical imaging devices. Transmission of large amounts of sensor data over potentially unreliable communications channels puts patients at risk. And the development of such a distributed processing system is too complex and long. It requires careful segmentation of algorithms, separate implementation and testing of both the edge device and cloud software, and then finally exhaustive testing of the entire system. The solution is to implement as much intelligence as possible at the edge and minimize transmission of data.”

The transition of #AI from hospital labs and operating rooms to initial points of care in the field is the next big step for #healthcare #IoT applications. @SECO_spa via @insightdottech

A Faster Path to Edge AI

Medical use cases are a great example of why IoT developers are turning to off-the-shelf, high-performance embedded computing (HPEC) solutions, with enough computing horsepower and efficiency to move cloud capabilities to the edge. But to provide the same level of service as the cloud, these solutions must also include high-speed I/O to ingest multiple Gigabytes of data per second from high end devices like ultrasound probes and other medical imagers.

These new processors employ a heterogeneous compute architecture with up to 14 Performance- and Efficiency-cores, and 96 Intel® Iris® Xe Graphics execution units. In use cases like a rugged medical edge server, an integrated intelligent, low-latency hardware scheduler routes complex AI workloads to the Performance-cores and graphics units, while less-intensive system management tasks are sent to Efficiency-cores.

Robust security and advanced virtualization technology are also crucial in these systems, especially considering the nature of medical applications. They must not only ensure critical operations are executed reliably and deterministically but also protect sensitive patient data from leakage or exposure.

“The performance and level of integration of disparate but complementary technologies in these processors are allowing new applications to be deployed more fully at the edge than before. They’re pushing more intelligence with less hardware, which of course means less size, weight, power, and cost,” Feldman says.

Onto a Board and Into the Field

Despite the processors’ efficiency, developing a compact, rugged edge server comes with serious thermal and electromagnetic interference (EMI) design implications. And the more advanced the processor, the more pins it typically has, the faster and noisier its signals become, and the more power it consumes.

Recognizing these potential challenges and the trend toward HPEC platform deployment, the PCI Industrial Computer Manufacturer’s Group (PICMG) released the COM-HPC computer-on-module standard. Like other COMs, COM-HPC leverages a two-board architecture consisting of a processor module and carrier board, but unlike others it was designed to support high-speed interfaces like PCIe Gen 5 and 25 Gbps Ethernet, processors up to 150 W, and includes two 400-pin connectors which enable a wealth of connectivity.

“More pins and power envelope in a designed and validated module,” Feldman says when speaking to the biggest advantages of COM-HPC. “One of the big things is just being able to utilize the high-speed interfaces through the COM-HPC connector. The development of circuitry utilizing interfaces like PCIe 5 and USB 4, for example, and high speed processors like the 12th Gen Intel Core requires high specialized knowledge of signal and power integrity, and how to apply it to circuit board design. Using a COM-HPC module eliminates the need to design the core computing platform.”

SECO’s Orion solution, a COM-HPC client size A module with a 12th Gen Intel Core H-Series mobile processor, is available off the shelf. But the company also designs and manufactures custom COM-HPC modules, carrier boards, and other solutions based on 12th Gen Intel Core S-series desktop processors that accelerate time to market and minimize risk.

And SECO even has a vertically oriented application software group, staffed by expert algorithm developers and data scientists, that can help get edge AI systems further off the ground.

Redefining the Medical Edge (and Cloud)

It’s been apparent since the early days that IoT applications would demand much more distributed intelligence than was in place at the time. At that point, many of the concerns were related to minimizing the amount of data that was captured and transmitted across a network, but increasingly the reasons have changed. Now it’s about capitalizing on what that distributed intelligence can enable.

“Once you do that, you can push more diagnostic equipment into the field,” Feldman says. “A powerful, rugged system can deploy in an ambulance, and you have more autonomy for first responders to make quicker decisions and take immediate actions.”