Want cameras to keep an eye on your property? Get ready for major installation hassles.

Cameras are fairly easy to install indoors, but move outside and things get complicated. Access to power and networking can be a problem in areas like parking lots, campuses, and public squares.

Organizations can sometime negotiate access to these connections. But in many cases, you will need to build your own connections. That means expensive permitting, trenching, cabling, and system setup—tasks that can take months or years to complete. (See Figure 1.)

Figure 1. Power and network installation can take a long time.

The challenges are even greater in remote areas like parks, and for short-term needs such as temporary event venues. In these situations, it may be impossible to secure power and network connections.

On top of all this, surveillance systems often need lengthy software configuration and technical training. If requirements change after installation, the whole process may need to start again.

V5 Systems has a novel solution to these challenges: a solar-powered, wireless surveillance system that can be installed virtually anywhere in under 30 minutes, according to the company. (See Figure 2.) 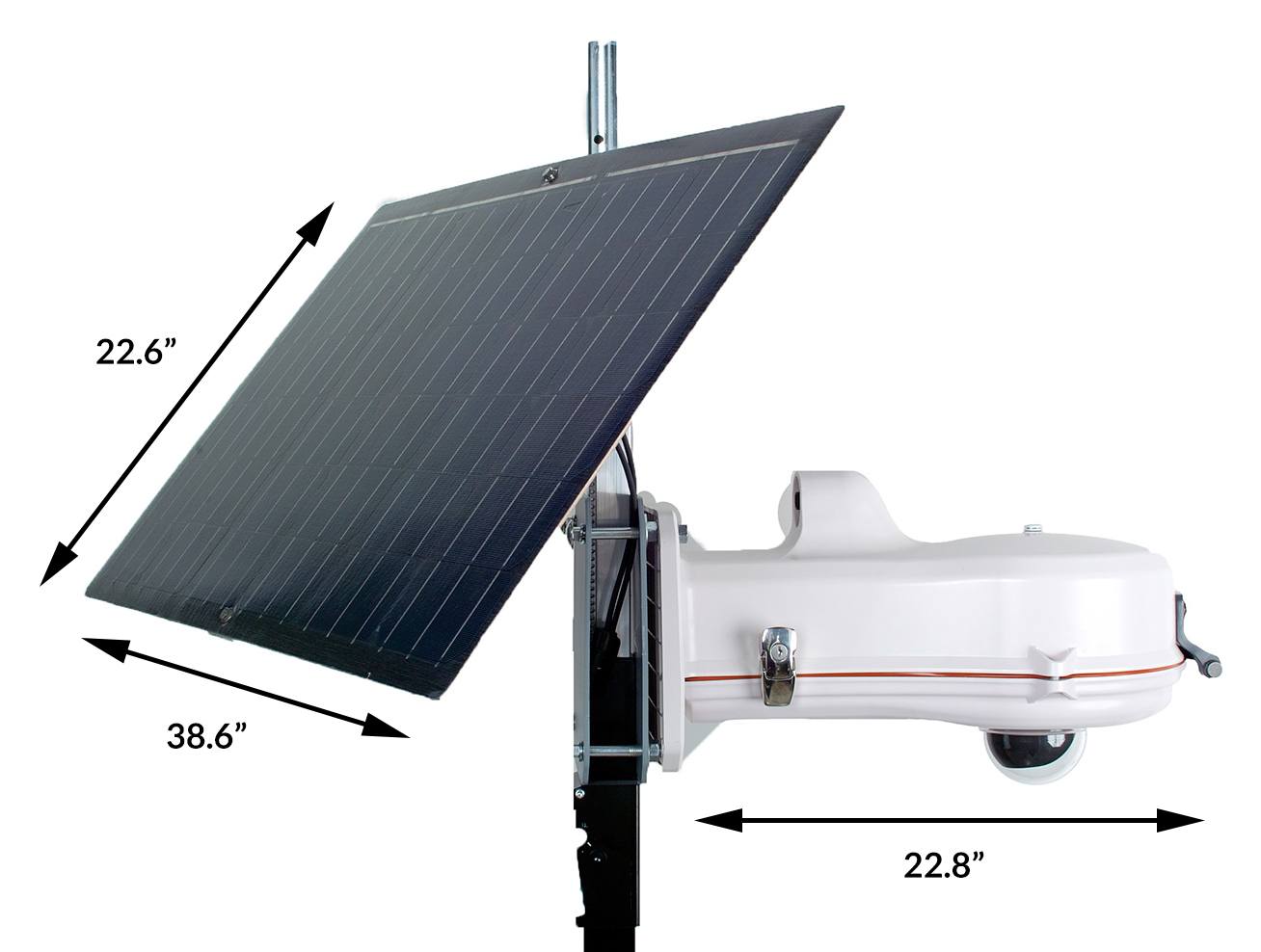 Because the system is completely wireless, it needs no power or network cabling. As a result, installation can be considerably less expensive than for traditional systems.

Consider an example from Hayward, California. The city wanted to address crime around its City Hall near a busy rail transit hub. Lacking easy access to power and networking, the city turned to V5 Systems.

According to the city, the initial 10-unit deployment saved $172,500 in trenching costs alone. Recurring savings occurred every time a unit was moved to another location. Best of all, the city experienced a 72.3% drop in calls due to crime.

The V5 Systems Portable Security Unit (PSU) comes preconfigured as an all-in-one, turnkey solution that includes not only video surveillance but also chemical and acoustic sensors. As shown in Figure 3, the system also includes a local video-processing engine based on the Dell Edge Gateway 3000, as well as a cloud-based video management system (VMS) and back end server.

Intel® technology is essential to this innovative approach. Within the Dell gateway, an Intel Atom® processor handles high-definition video and AI with ease—while also keeping power consumption well within the constraints of the solar panel output.

To safeguard the power source, the solar panels are bullet-resistant and arranged in parallel so they can continue to operate if some of panels are deliberately broken or compromised.

To further ensure continuous operation, the camera is equipped with a rugged battery pack. The Dell gateway and its Intel Atom processor, Intel® SSD storage, and Intel® wireless networking have also been ruggedized to withstand the rigors of outdoors environments.

The V5 back end is also noteworthy. Designed for ease of use, this back end runs on Intel® Xeon® processors, which provide ample performance for digesting and analyzing video feeds from a large network of cameras.

The AI built into the system creates possibilities that go beyond basic camera functionality. Using AI, certain behaviors can be tracked, like a backpack being left behind in a crowded area or a person raising his/her hands in distress (Figure 4). The system can also combine sensor inputs—such as acoustic tracking and video feeds—and correlate across multiple cameras to intelligently assess the situation.

Consider the example of suspect fleeing a location. In this case, The V5 Systems network of smart devices would “talk” to one another to track and relay the person's movements in real time. The AI could even allow for video visualization on a Google map.

A New Approach to Outdoor Security

Until now, outdoor surveillance systems have been possible only where power and connectivity were available. In many cases, this required extensive and time-consuming permitting and construction to build out the requisite cabling.

The V5 Systems approach turns this situation on its head. Now surveillance systems can be installed anywhere the sun shines—cutting crime and bringing security to virtually any location.