The challenges start with IoT device density. 5G can support 2.6 million devices per square mile, and every connection must be secure. And the list of security functions keeps growing. Packet inspection, key generation and storage, and end-to-end encryption are just a few issues network architects must consider.

These security requirements can create serious bottlenecks that hamper performance. For instance, a single SSL/TLS handshake can consume up to 2 percent of a processor’s resources and add 5 ms of latency.

CSPs looking to capitalize on 5G should be wary of the ways security can impact their systems, as well as solutions that can offset those limitations.

Intel® Xeon® Scalable Processors offer one possible solution. The new processors support as many as 224 cores and 12 Terabytes of memory in an eight-socket configuration (Figure 1), delivering the packet processing and control plane resources required for secure 5G network operations.

The new chips offer impressive performance gains across a range of 5G tasks. These include a 1.77X boost in L3 packet forwarding, a 2.5X acceleration in IPSec performance, and a 2.4X improvement in SSL Web Proxy transmissions (Figure 2). 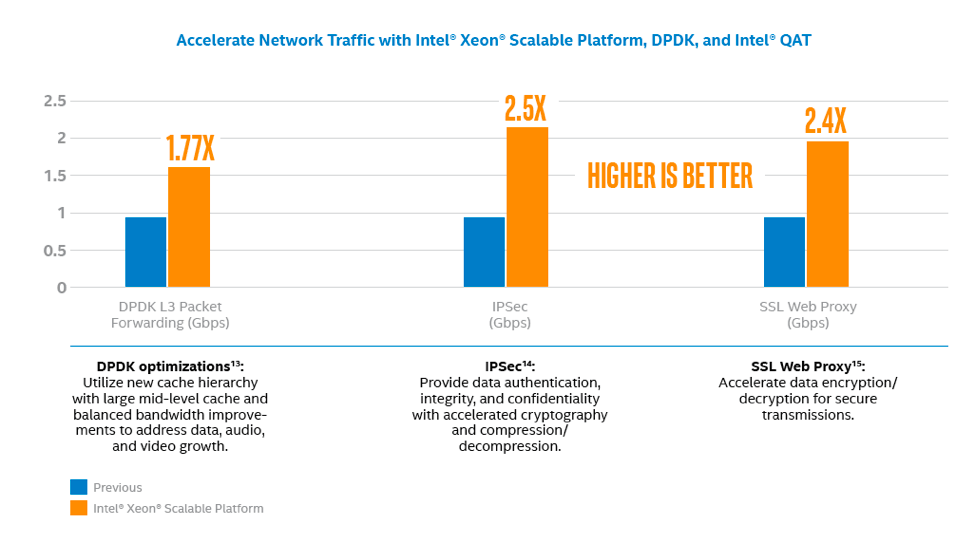 Advanced Network Security Performance From the Ground Up

Intel® AVX-512 is a new set of instructions designed to optimize ultra-wide (512-bit) vector operations such as those used to generate cryptographic primitives. The instructions are supported by two 512-bit fused multiply-add (FMA) units per core, which help deliver double the FLOPS per clock cycle of AVX-512 over its predecessor.

Off-chip I/O has also been updated to extend performance beyond a single processor. For starters, the new Intel® Xeon® Scalable Processors include up to 48 PCIe 3.0 links and six memory channels that support 2666 MHz DDR4 DRAM. The latter equates to a 50 percent increase in memory bandwidth over the last generation.

But the main I/O enhancements for massively scalable 5G network infrastructure are in socket-to-socket and system-to-system connectivity.

Between sockets, the Intel® Ultra Path Interconnect (Intel® UPI) provides a cache-coherent, 10.4 GTps data path between CPU sockets (Figure 4). The interconnect can scale to support up to eight processors per system under a single shared address space, with each Intel® Xeon® Scalable Processor, including two or three native Intel® UPI links. 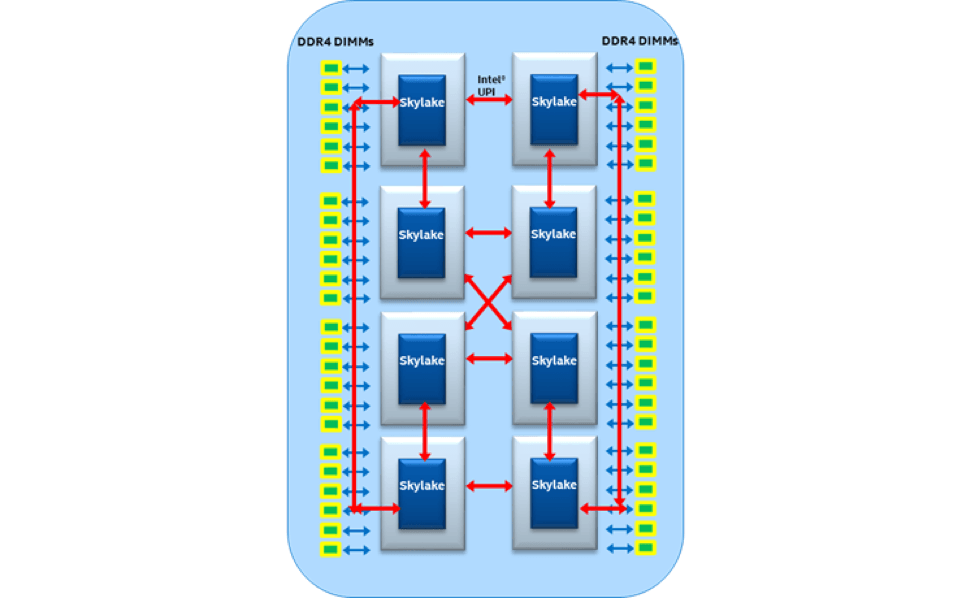 To enable and secure 5G deployments that consist of millions of devices per square mile, the Intel® Omni-Path Architecture (Intel® OPA) fabric supports 10,000 or more nodes for each high-performance computing (HPC) network cluster.

Intel® OPA is the successor to Intel® TrueScale Fabric, and positioned as the next-generation alternative to InfiniBand. While its cost and 100 Gbps line rates are currently comparable to competing technologies, Intel® OPA’s feature set is the key differentiator for 5G networks:

Intel® OPA is integrated in the package of Xeon® Scalable Processors to ease the deployment of HPC networks and security applications.

A Companion for Near-Zero Encryption Overhead 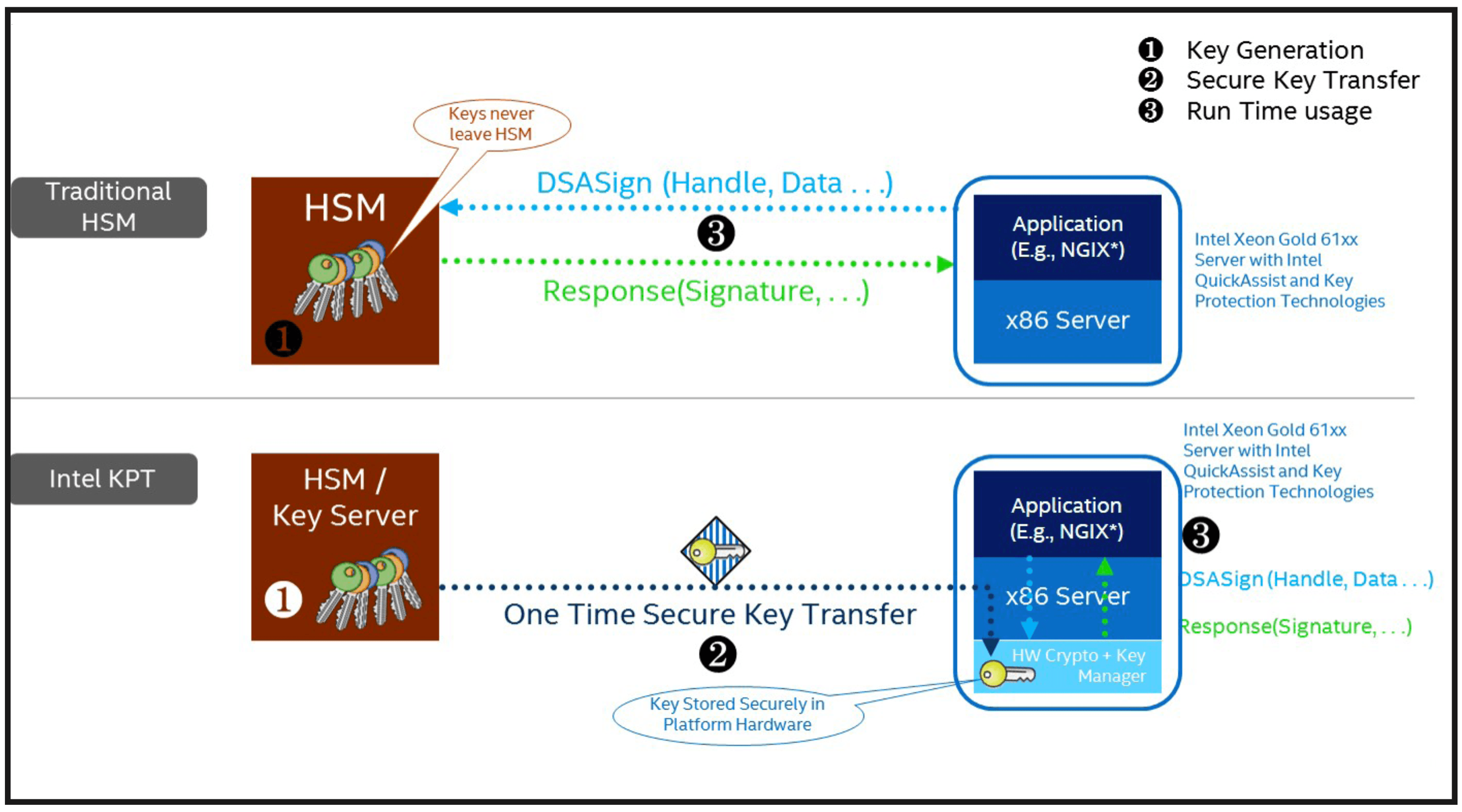 Intel® QAT also supports all standard device virtualization models. This extends the features of Intel® QAT and Intel® KPT to all virtual machines (VMs) running in a system.

5G and the Converged Infrastructure Shift

As a result, network equipment providers (NEPs) are bringing standards-based hardware platforms to market that support networking, storage, security, and other functions in a single package. 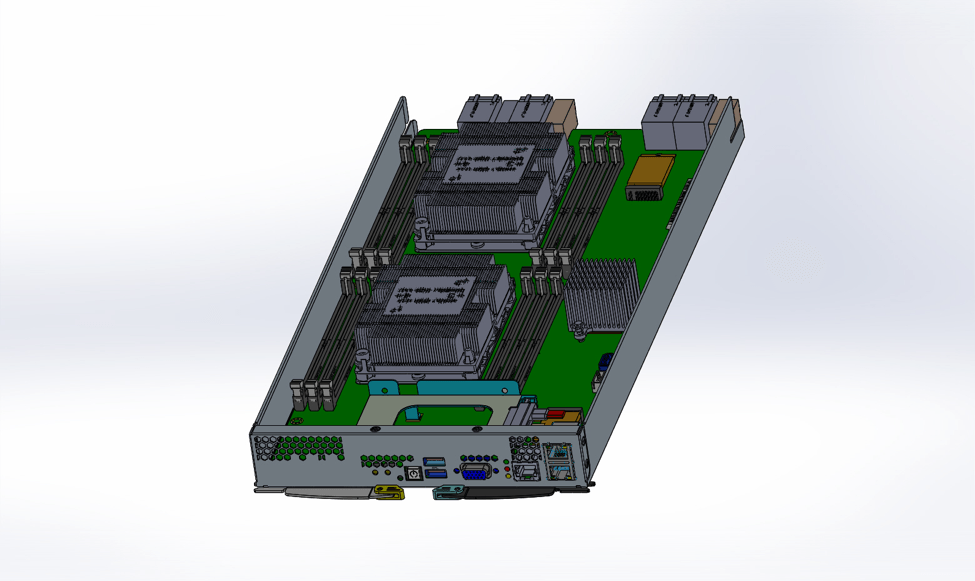 The standards-based approach of OpenSled allows modules to provide on-demand resources in converged infrastructure platforms. For example, an MCN-2610 module in a UTM system could dynamically switch between DPI and general-purpose routing as demands change.

Secure 5G Networks Before They Deploy

5G networks have the potential to enable entirely new ecosystems and services, thanks to significant increases in performance. These benefits apply to burgeoning IoT opportunities in addition to traditional networking applications.

CSPs looking to capitalize on 5G benefits should be wary of the ways security can impact the performance of their systems, as well as solutions that can offset that overhead.

With Intel® Xeon® Scalable Processors and compute nodes like the MCN-2610, they need look no further in the transition to converged 5G infrastructure.