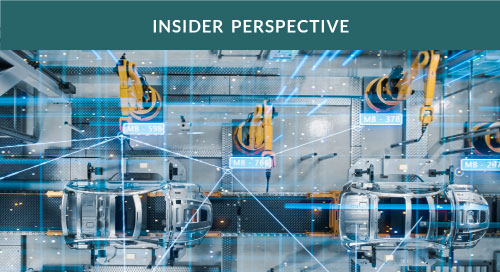 There are more devices connected to the internet—and to one another—than ever before. With IoT and AI proliferating in today’s smart factories, the number of sensors and the amount of data are both increasing all the time. In fact, Industry 4.0 might sound like a world of challenges and complexities. But it doesn’t have to be that way. Communication standards and cooperation among the players involved can go a long way toward translating those challenges into benefits for the industrial process.

A panel of experts discusses the efforts that the OPC Foundation is making to that end, and the potential for the OPC UA and other standards to transform communications in the manufacturing and industrial space. The panel consists of: Bernhard Eschermann, CTO of Process Automation at ABB, an industrial-digitalization leader; Stefan Schönegger, Vice President of Product Management at B&R Automation, a member of the ABB group; David McCall, Senior Director of Industrial and Consumer IoT Standards at Intel; and Peter Lutz, Director of Field Level Communications at the OPC Foundation.

What are the biggest challenges on the factory floor today?

Stefan Schönegger: It’s our customers who are facing the challenges, and security is really the first pain they are facing today. If devices in a manufacturing plant are even talking to each other at all, they’re not considering security.

But there is still a tremendous amount of equipment that’s not yet communicating, probably because it doesn’t yet have the capability to exchange data. It’s a very heterogeneous world, with equipment coming from different vendors and different vendors using different, primarily proprietary, standards. That hinders the introduction of advanced analytics, of data being transferred and converted into value. OPC UA and TSN are the answers to those problems.

Why has it been so difficult to get these devices to communicate with each other?

Bernhard Eschermann: In the past, multiple communication standards were developed by different companies, and none of them wanted to give their particular standard up. Another challenge is that we don’t have consistent information models for data when it moves from the instruments where something is measured, through the automation and to the edge, to central service and the cloud.

The OPC UA standard provides a way to have consistent information models between all of these different layers, and there’s no translation effort or loss of information in between them. All of that is very important to a dramatic change in the world of communication.

I always compare this situation with building railway lines between two cities. Instead of building one big railway line, which would be the most efficient way to get fast trains from A to B, we have multiple lines that are all slower. And with this new standard we should finally get this one, very fast railway line.

What are the benefits of these digital technologies for the manufacturing industry?

You’ve got two drivers: IoT in general; and then, more specifically, AI and machine vision, which I would put together. IoT generally means more devices, which means more connectivity. Not all of that is probably going to be mission critical, and not all of it’s going to be wired in the long run either. We’re expecting to see wireless technologies—whether that’s Wi-Fi or 5G—coming into those non–mission-critical areas initially where safety requirements or monitoring is being deployed quickly and cheaply.

Then you’ve got the AI/machine vision. Those workloads ingest huge quantities of data. Most of them are running in the data center and they may not be timing-critical, but there are huge opportunities for applying them to mission-critical, timing-critical loads. It’s blurring the lines a bit between what is traditionally thought of as IT technology or OT technology.

Long term we’re looking at having a single deterministic network that spans both wired and wireless technologies, and the workloads can just take the appropriate path. You’ll deploy the right technologies in the right places, and it will all be a homogeneous network that any protocol can take advantage of.

But it’s a huge amount of work, which is one of the reasons for trying to make sure that this is all going to work over one network. We put in that huge amount of effort once, and then everybody can use it.

How is the OPC Foundation addressing these challenges with its open standards?

Peter Lutz: Stefan and Bernhard mentioned OPC UA, so I’ll give a quick summary of what is so special about it. It’s what we call an industrial framework to support interoperability, and it includes built-in security mechanisms, and mechanisms to do information modeling. This then drives the common semantics—semantics that are absolutely vendor neutral and vendor independent.

We are also working on extensions to OPC UA to enhance cloud connectivity, but also to bring it to the field for deterministic communication, motion control, instrumentation, and functional safety. We can establish it as a fully scalable industrial-communication solution from the field to the cloud, and also horizontally.

OPC UA FX is the term we use for the extensions to the framework that cover the various use cases at the field level. This includes, for example, controller-to-controller communications, but also communications from controller to field device, and field device to field device. And the solution is based on the existing OPC UA framework, so any company supporting OPC UA today can easily migrate or upgrade its products or applications to also support the extensions for field level.

“Long term we’re looking at having a single deterministic network that spans both wired and wireless #technologies, and the workloads can just take the appropriate path.” – David McCall, @intel via @insightdottech

What benefits might your customers see if they start utilizing these standards?

Having this OPC UA layer throughout the system—on different physical layers and on different transport protocols—means that the interpretation of data stays the same throughout the system. It also stays the same no matter which supplier any particular piece of equipment comes from. So it helps the customers because they can connect anything to anything. It helps us because it reduces the effort on our side in developing different mappings and adapters.

Why join the OPC Foundation to work on these standards?

And if you look a step further into the future, going towards more autonomous systems, you can’t manually interpret data or push data over gateways and still hope the semantics haven’t changed. Autonomous systems will require autonomously working analytical paradigms. And you will end up with capabilities that are only provided by OPC UA and FX.

What is Intel’s involvement in the OPC Foundation and these standards.

David McCall: We wanted to get involved to make sure that it was a really strong and viable standard—not just at the technology level but at the business level. We can put together demonstrators and be right there at the cutting edge, because we do see OPC UA FX as leading the way, showing how you can put together the technologies that are going to be absolutely critical in the next five to ten years.

What can we expect next from the OPC Foundation?

Peter Lutz: This is a framework; we are continuously improving our specs. One key technology is certainly TSN, because it provides us the deterministic transport, and it is also key for IT/OT convergence. We are also working on cloud connectivity. Overall, we have a big framework and multiple working groups, so we are continuously improving and updating to the needs of the industry.

Where do you expect industrial communications will go from here?

David McCall: Peter made the point that OPC has really succeeded in making itself the de facto future for the industry. The only question now is how quickly is that transition going to happen? Right now we see that all of the major vendors are looking to support their own existing protocols, plus OPC UA FX. I think OPC UA FX will gradually become the lingua franca of IoT right down at the control level. All the major cloud vendors are all standardizing on it. And then—particularly in greenfield sites and then gradually more and more across brownfield sites—it’s going to become the de facto communication protocol.

Stefan Schönegger: From the point of view of factory operators or equipment producers, if you just want to focus on the efficiency and output, or maybe on the adaptability of your factory and production line, and you’re asking: “How I can connect one device with another from a different vendor?” OPC UA is the answer.

Peter Lutz: I’m absolutely convinced that OPC UA—especially with the extensions we are currently working on for field level—will become the dominant industrial communication standard. There are two aspects to this. On the one hand I believe that with the framework, with the strict layering, with the flexibility, and all the features that OPC UA is providing it’s a future proof solution from the technical perspective. But it’s becoming the standard just because of its broad acceptance. And I think this is finally the success formula for a broad adoption of OPC UA across all different levels.

Bernhard Eschermann: What we should think much more about is how to get value out of the wealth of data available in the various factories and plants around the world in order to improve efficiency. I’m convinced that the world will benefit a lot, not just from the communication standard itself, but also from being able to make much more use of the data that is already available.

And a final thought: There are lots of places where competition makes sense—how to use data to create useful insights, for example. But competition doesn’t make sense in developing communication standards that are all doing the same thing.

To learn more about OPC UA, listen to our podcast on Uniting Industrial Communications with Open Standards. For the latest innovations from ABB, B+R, Intel®, and OPC Foundation, follow them on Twitter at @ABBgroupnews, @BR_Automation, @Inteliot, and the @OPCFoundation; and LinkedIn at ABB, B&R Industrial Automation, Intel Internet of Things, and OPC Foundation.