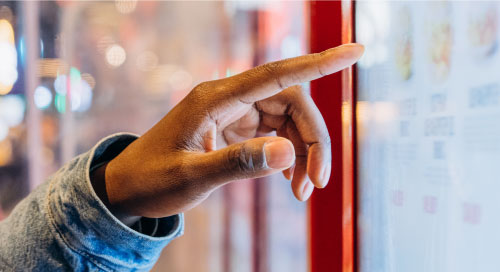 Self-service kiosks are on the rise in every industry, driven by demand from consumers and businesses alike. It’s easy to understand why. Customers like the convenience and interactivity of self-service kiosks. And businesses appreciate the way they streamline operations and relieve overstretched workforces.

But despite this, there remains one significant barrier to implementation. Most self-service kiosks rely on touchscreen technology—and this can be a deal-breaker for several reasons. First, there’s the issue of cost. A fleet of touchscreen kiosks or attractive large-format models represent a major investment for most businesses.

Maintenance is another concern. Post-pandemic, people are wary about touching something that so many other people have touched. For customers to feel safe, touchscreens must be cleaned frequently, which takes time and effort. In addition, a damaged all-in-one touchscreen kiosk can be costly to repair. A single dead pixel may require the replacement of an entire screen.

These are serious challenges. But advancements in edge AI and 3D computer vision are now enabling touchless self-service kiosks. This technology solves many of the issues of traditional touchscreens, which will drive adoption across multiple industries and may even usher in a new era of human-computer interaction.

At first, a “touchless” touchscreen might sound like a contradiction in terms. But the basic concept is straightforward. Touchless self-service kiosks use a deep learning-based technology known as skeleton tracking that treats the user’s hand as a mouse pointer.

“We create a virtual pane between the user and the display screen. An AI-enabled 3D camera tracks the user’s hand to emulate scrolling, and when their fingertip crosses the pane, it’s interpreted as a mouse click,” (Video 1).

Of course, any system based on high-resolution 3D imagery will need to process a large amount of data—far too much to send to the cloud if you want real-time interaction. That’s why touchless displays use AI to perform their visual processing on the edge. Lee says LIPS’ technology partnership with Intel® helps make this possible:

“Intel CPUs are powerful enough to handle heavy computational workloads—and are particularly good for computer vision and edge AI applications. In addition, the Intel® oneAPI toolkit simplified the development process, allowing our engineers to write a solution driver that works on many different platforms.”

Lowering the Barrier to Adoption

Significantly, touchless self-service kiosks powered by the LIPS solution are more modular than their touchscreen-based counterparts. The camera and touchless interface driver are separate from the display screen.

This means that existing touchscreen-based kiosks can easily be retrofitted by plugging a 3D AI camera into a kiosk’s USB port and installing a driver. Perhaps even more importantly, any display screen—even a non-touch display—can be made interactive with the addition of these components.

For businesses and systems integrators alike, these are attractive benefits. Touchless technology makes implementing self-service kiosks, including ones with large displays, easier and more cost effective.

In addition, maintenance is greatly simplified. “You don’t have the same burden of cleaning that you do with touch displays,” says Lee, “and if you’ve retrofitted a non-touch display screen and that screen breaks, you can replace it cost effectively—without having to replace everything else.”

From Healthcare to Hospitality

Proof in point is LIPS’ experience during the COVID-19 pandemic. For example, the company was approached by two organizations that relied on touch-based kiosks for daily operations: a quick-service restaurant chain and a local hospital.

Despite the obvious differences, the restaurant chain and the hospital had a number of things in common. They were concerned about the health and safety of the people they served. They couldn’t just stop using self-service kiosks, as these were deeply integrated into their workflows. And their staff members were already stretched thin, making it impossible to spend extra time and effort to sanitize each touchscreen after use.

To address these challenges in the restaurant, LIPS retrofitted the in-store self-ordering kiosks with their 3D camera systems, resulting in a touchless equivalent that was able to perform the same operational role in the restaurant. At the hospital, LIPS used the same technology to make the patient reception area’s touchscreen queuing system completely touchless.

At both locations, leadership was pleased with the speed of the retrofit, the ease of maintenance, and naturally, the lowered risk of transmission.

The Future of Interactivity

The LIPS restaurant and hospital deployments demonstrate why touchless technology has such a bright future. In the years ahead, expect touchless self-service kiosks to gain traction as more and more businesses wake up to their potential.

That potential is about much more than ease of implementation. Unlike many touchscreens, touchless displays are not based on capacitive sensing, so they don’t require a bare hand to operate. This means they can be used by people who wear prosthetics—a huge step forward for accessibility. It also means that people working with gloves or protective gear can use them, making the technology useful in surgical settings or industrial environments like microfabrication cleanrooms.

The range of possible use cases across many industries holds the potential to bring about a real change in the way human beings benefit from self-service systems. “Touchless technology could be as big as touchscreens were for smartphones and tablets,” says Lee. “It will make our world a better, safer, and more interactive place.”

This article was edited by Georganne Benesch, Associate Editorial Director for insight.tech