These challenges make it difficult for cities to meet economic and quality-of-life objectives such as supporting local businesses and communicating with citizens.

Cities across the globe are looking for solutions, and are expected to spend $425 billion USD this year on smart city technology. But tech alone won't solve the problem—what's needed is innovative thinking.

The difficulties that cities face in meeting their challenges stem from two sources. First, most municipalities are resource-constrained. Second, city leadership focuses more on engagement than technology.

When city planners do focus on technology, they tend to think about back-office applications in support of primary services. Think social security activities, issuing licenses, and processing government information.

The problems cities face are compounded by citizens' fast-paced adoption of new technology. Ride-sharing services like Uber and Lyft are prime examples. In the past, cities carefully planned public transportation systems and taxi regulations. Then a new business model like Uber comes along and disrupts all the planning.

What's a city to do? Avoiding single-function, siloed solutions is a good place to start. When smart city efforts fail, the problem can often be traced to underpowered, proprietary technology. These systems often suffer from a lack of connectivity to city back-end systems and private-sector applications used by citizens and businesses. The result is a fragmented, hard-to-maintain mess of point solutions that quickly become obsolete.

A better approach is to approach each smart city project strategically, with an eye on flexibility and interoperability. But trying to solve the smart city challenge holistically is a daunting undertaking. How then can a city fully engage its tech-savvy population in a cost-effective and flexible manner?

To answer this question, Arthur Van De Poll, CEO of Citybeacon, sought the advice of numerous civic leaders. Their experience suggested that a successful solution should: 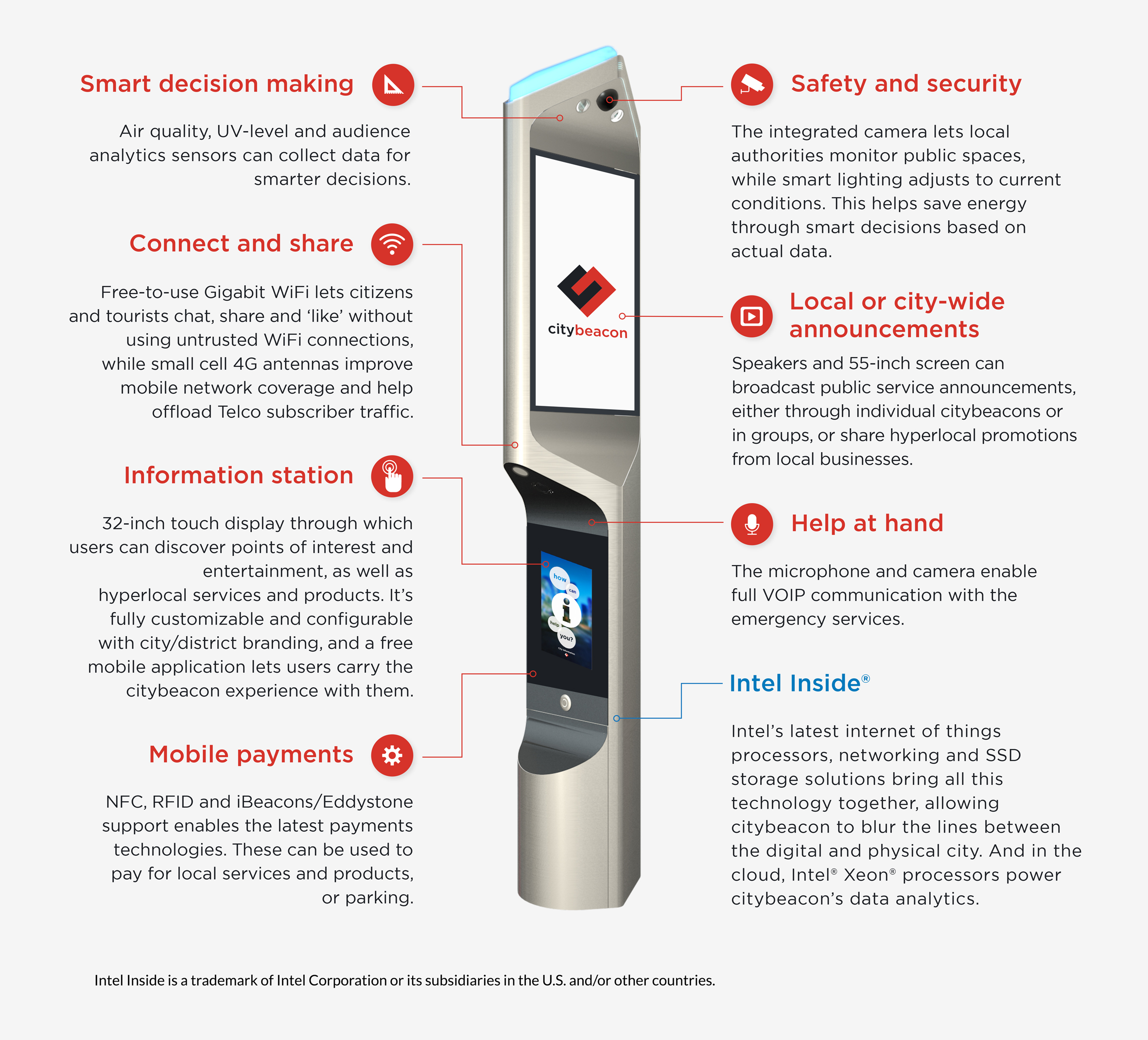 The Smart Hub is meant for use in busy civic venues—such as town squares or train stations—where it can boost the local economy, facilitate communication with citizens, and serve as a place for telecom companies looking to expand network coverage and offload traffic.

"We came up with the platform idea across the domains of connectivity, security, and information exchange," explained Arthur. "Satisfy these basic features in an appealing but not intrusive Smart Hub located in the center of the city, where things come together."

For the business community, Citybeacon offers a hyper-localized marketing and sales channel. Imagine the scenario illustrated in Figure 2: The upper display plays a movie trailer and ticket offer. A movie lover and her friend purchase tickets via the lower touch screen and pay with an NFC-enabled smartphone. No need to queue at the cinema!

Before the movie starts, an alert is sent to their phones and their map application guides them to the cinema. When they arrive, a proximity beacon triggers and treats them as a VIP with welcome messages and further promotions. 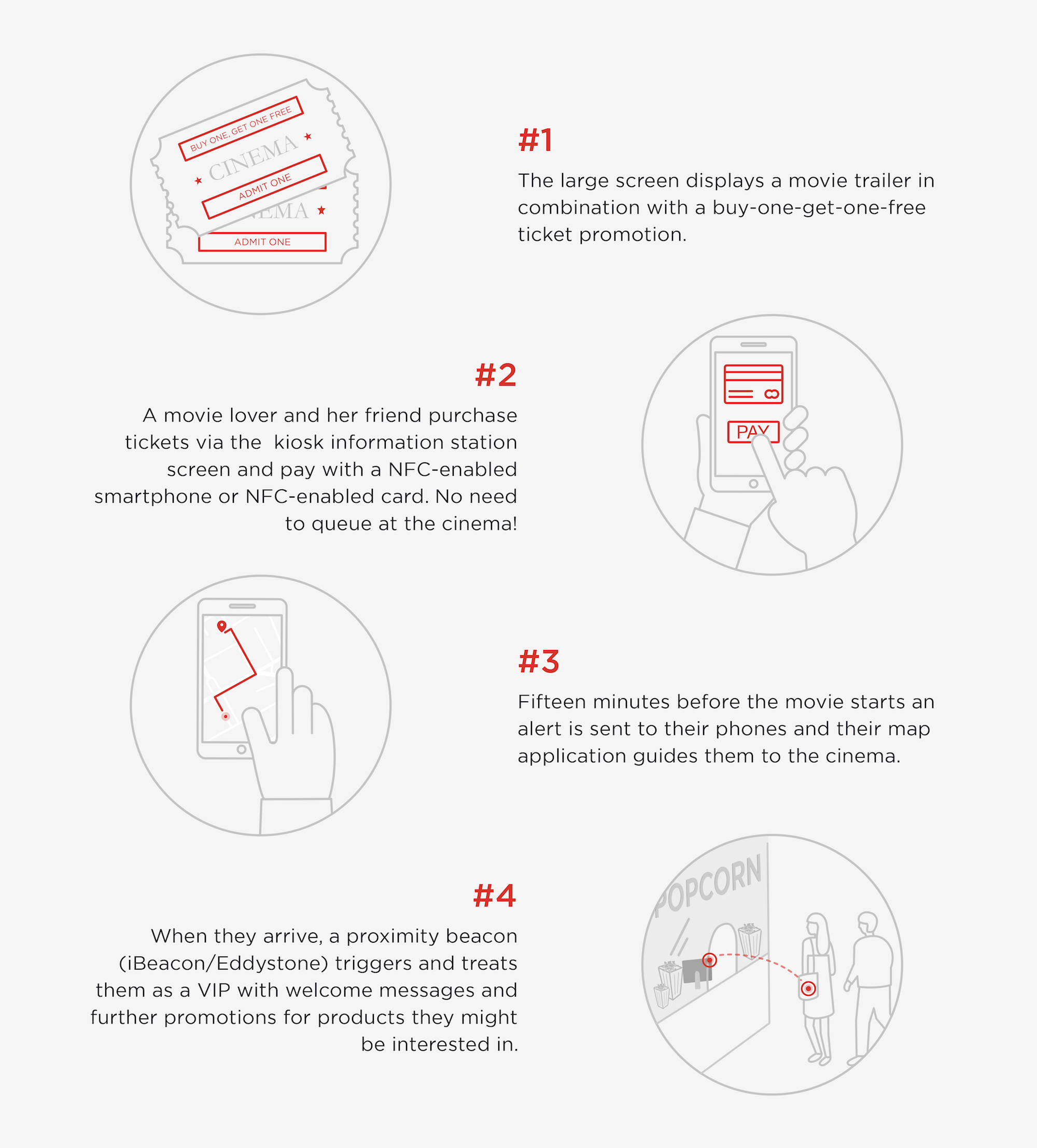 This scenario highlights an important feature of Citybeacon: its support for third-party applications. Cities can develop new services and resources for the platform through an open API—or they can download applications from a central app store.

In the same way that smartphone apps have grown new revenue streams for all kinds of businesses, Smart Hub apps can help boost local economies and improve city services. "That's why I designed our Smart Hub as an app store for the street, acting essentially as a large smartphone," explained Van De Poll. "This approach was needed to avoid the smart hub failures of the past that were often due to limitations of technology but also from static content and single functionality."

The similarities to a smartphone extend to the Smart Hub's network connectivity and rich sensor suite. For example, cameras built into the Smart Hub can interpret the age and gender of passersby and trigger tailored offerings. The Smart Hub can then evaluate the success of different campaigns based on how long people watch the promotion.

The built-in cameras are also part of the Smart Hubs' security and public safety features. The cameras can monitor the public space and use data analytics to detect issues like overcrowding. Other built-in sensors help local authorities make smarter, faster decisions.

Beyond information-gathering, the Smart Hub allows cities to act on data in real time. Announcements can be displayed and pushed to local cell phone users in emergency situations. Imagine having the capability to alert citizens of a dangerous gas leak via the Smart Hub's large display, broadcast speakers, and even cell phone alerts.

Citybeacon can also serve as a hub for a larger sensor network, connecting to nearby cameras and other equipment. The Smart Hub can analyze the accumulated data and trigger actions by other smart city systems.

"We worked with partners like GE and Phillips to connect to their intelligent smart lighting platform," explains Van de Poll. "We combine all the data elements to bring intelligence into the smart lighting grid. For instance, if our cameras and linked cameras see few people or cars in a given location, the citybeacon would give a pulse to the lighting grid suggesting that the grid dim the lights to 70% of the normal power consumption."

One Smart Hub can host up to four small cell units from telco partners. Aside from easing traffic congestion, each Smart Hub can save the telcos a sales session, since Citybeacon has already engaged with the city planners concerning the location and functionality of each Smart Hub, notes Van De Poll.

This flexibility extends to hardware configurations. "We can configure the Smart Hub with or without surveillance cameras, small cells for the telcos, environmental sensors, or whatever modifications are needed based on partner needs," confirms Van De Poll. "In Barcelona, we are launching a smaller form factor of the Smart Hub, one that is geared to a different type of location. But it is still configurable — we can replace the hardware and turn on-off functionality in software."

The Heart of Connected City

The need for tomorrow's cities to have smarter infrastructures, ubiquitous connectivity even in the densest of urban locations, and to engage the citizens and businesses are the main drivers behind the Citybeacon Smart Hub. Call it what you like – a large sensor, a hub, a smartphone for the city, or an app store for the street – the multifunction Smart Hub will add intelligence to any city.