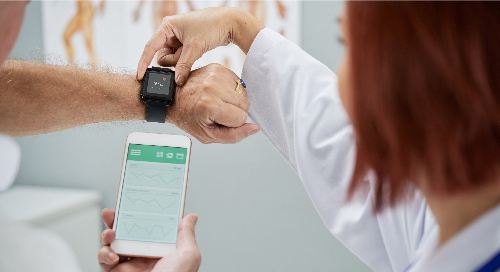 Healthcare providers depend heavily on data to treat patients. When a patient gets any type of test done, whether it is an MRI, x-ray, or blood test, data is captured for analysis and diagnosis. The machines that generate the images or analyze the bloodwork transmit the data back to the healthcare systems so doctors can determine and evaluate the results.

Sounds easy enough, but it doesn’t always happen that smoothly. For that data to make the trajectory from the lab to a doctor’s office, a lot must happen behind the scenes. For one thing, multiple healthcare devices are used to take a patient’s vitals—blood pressure, heartbeat, height, and weight, for example—and those devices don’t communicate with one another.

In addition, patient data must travel across hybrid infrastructures made up of on-premises, cloud components, and, increasingly, IoT and edge networks. These networks also don’t always use the same language. And then there are the software systems that package and handle data differently from one another.

For patients to get the best care possible, their data must move between devices and analysis systems to the doctors’ computer screens.

“There are more and more electric devices and computers being deployed to record patient data than ever. This creates a big challenge trying to gather the protocols from all these vendors and then transfer the data in the correct format for hospitals and patients to receive,” says Kenneth Lee, Product Manager at Portwell, a Taiwan-based industrial PC manufacturer.

Portwell is looking to tackle these issues with its standalone box at the edge, the NANO-6063. With NANO-6063, healthcare providers can deploy a small, nondescript embedded system on the box, which enables them to send and receive instructions from multiple servers and healthcare devices—linking solutions to deliver patient information to doctors, nurses, and patients.

The solution is designed with hospital/clinic needs in mind, such as low power consumption, compact design, sufficient I/O, long lifespan, and harsh conditions. It does this using the NANO-ITX form factor and the Intel® Atom x6000E processor series. But more than just a data traffic cop, the NANO-6063 acts as an interpreter by converting data signals to make sure the information will be understood when it arrives. This is necessary because manufacturers often use different protocols while hospital systems accept data in a variety of different formats.

“All this data needs to be collected and analyzed for doctors and providers to better diagnose and monitor their patients’ healthcare conditions,” says Lee.

Traditionally, Portwell has targeted other markets, such as electronic signage and factory automation, according to Lee. But with healthcare becoming more dependent on digital systems, the company saw an opportunity to leverage its existing technology to help providers solve their healthcare data management problems.

For patients to get the best care possible, their #data must move between devices and #AnalysisSystems to the doctors’ computer screens. Portwell via @insightdottech

For example, one existing manufacturer customer uses Portwell’s technology to control robotic arms on the assembly line. “Similarly to how a hospital works, they have a server for the factory to control the whole production line. But on the production line, they have a small box to control each robotic arm. Using this control box, they can execute some simple orders from the server, and then collect data to provide feedback to the server,” Lee says.

A similar approach can be used in hospital settings, he says. But instead of controlling communications between servers and robotic arms, the NANO-6063 enables transmission of data between medical equipment and hospital servers.

Another example of Portwell’s NANO technology in action involves giant digital-signage screens in stadiums. Often the screens are deployed outdoors, which means they may be exposed to all kinds of weather—snow and cold temperatures in winter, high temperatures in summer, and rain any time of the year.

The advantage of using a NANO-6063 in these situations is that the system boards are built to withstand extreme conditions, says Lee. The ruggedness is also useful in edge networking locations—whether indoors or out—that lack the climate control systems that data centers have, he says.

Key to the development and marketing of the NANO-6063 is the use of Intel chips, in this case the Atom x6000E series. Currently, 90 percent of CPUs used by Portwell come from Intel. And the company plans to continue leveraging the Intel relationship as it forges its new path into the healthcare market. Being a part of Intel’s early-access program allows the company to get access to new processors before they launch, allowing them to get solutions to market faster.

Portwell also works with system integrators to make solutions like the NANO-6063 possible. Since healthcare facilities like hospitals use many different devices or computers from a variety of vendors, Portwell provides system integrators with the computing parts they can combine in their software solutions to enable the receiving, translating, and directing of data.

“As there is an increasing reliance on digital systems and data for healthcare providers to do what they need to do, we will look to create new hardware and software solutions and transform the space,” says Lee.