The cost of installing cables and electrical access is among the most cost-intensive aspects of new construction in terms of labor, materials, and maintenance. According to building codes, installing or altering any permanent wiring or electrical device requires a permit and a licensed electrician. This is costly for organizations attempting to increase efficiency by flexibly reconfiguring office space and factories. It is also costly to run electric power to remote locations outdoors. These challenges make it difficult to take advantage of the plethora of IP-enabled devices now prevalent in home and industrial environments.

Power over Ethernet (PoE), which adheres to the IEEE 802.3af and 802.3at specifications, addresses these difficulties by providing both electric power and data connectivity on standard CAT-5/5e twisted-pair Ethernet cables. PoE provides cost savings and design simplicity over alternative means by making power available wherever there's a data socket. This is particularly convenient when installing remote devices, like perimeter sensors, where no power source is available.

Depending on the mode used, PoE provides up to 15 or up to 30 W of power for network access/edge switches and routers, VoIP phones, IP cameras, and other sensors. WiFi and Bluetooth access points and RFID readers are increasingly using PoE so that they can be located wherever required without regard to location of AC outlets. The PoE standard supports 10Base-T, 100Base-T, 100Base-TX, and 1000Base-T (Gigabit Ethernet) interfaces, with cables running to 100 m.

WiFi has many applications, but wired connectivity still uses less power and is preferred for harsh environments. USB is another alternative to PoE, but at under 5 W (USB 3.0 can provide 900 mA at 5 V), it doesn't provide enough power for many high-function devices.

The advantages of PoE in embedded applications are numerous. Existing network cabling can be used, avoiding the cost of providing AC power or a dedicated power connector to each device. The PoE cable is a low-voltage circuit that doesn't require a licensed electrician for installation. PoE cables can be safely installed in plenum spaces, greatly reducing the cost of adding connectivity to existing structures.

PoE designs adhere to an IEEE standard, but the average printed circuit board designer is generally unaware of how to account for the signal integrity challenges of a PoE implementation, which must work at any cable length and under a variety of environmental conditions. The simpler approach is to adopt a proven off-the-shelf single board computer with PoE capabilities.

One example is the LEX Computech 3I390NX Series 3.5-in. motherboard, which provides PoE to four of its five Ethernet ports in either 15 or 30W mode. (Figure 1). It's based on the latest Intel® Pentium® Processor N4200/N3350/E3950 (formerly Apollo Lake) processor family. 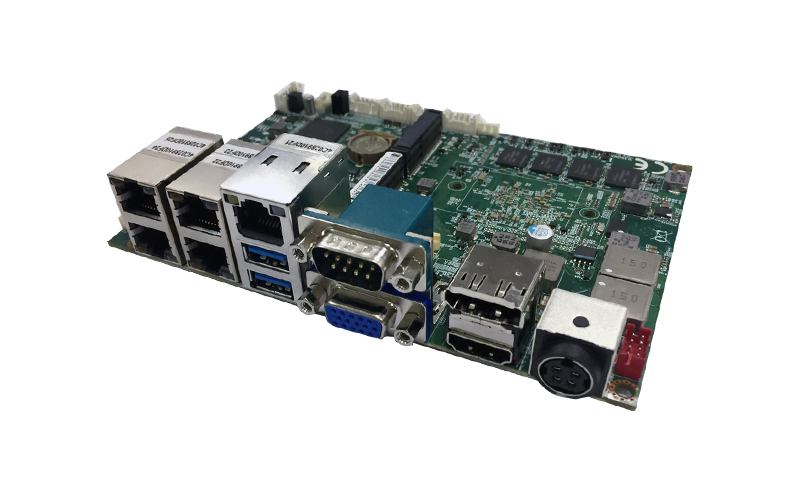 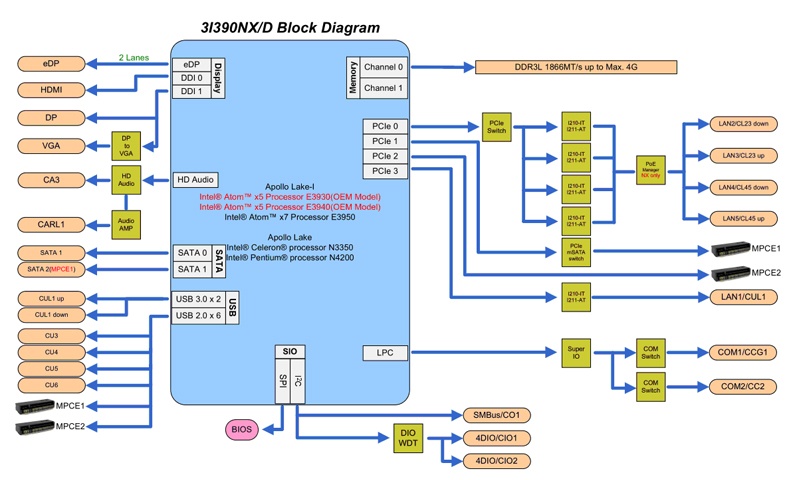 The board's five Ethernet ports are provided by the Intel i211AT GbE LAN chip. The Intel i1211 AT is a PCIe-based integrated GbE MAC and PHY designed for LAN on motherboard (LOM) designs.

The Intel i1211 helps prevent the CPU from being overtaxed by providing hardware assist for TCP offload, for packets up to 256 kbytes, and end-to-end CRC checking of frames. Without this support, these processor-intensive operations could otherwise consume a significant portion of a CPU core's processing bandwidth, leaving less available for an end application. This is especially significant in light of the 3I390NX SBC's five Ethernet ports.

Notably, the controller supports EEE (energy efficient Ethernet, IEEE 802.3AZ), a low-power idle state for 1000Base-T and 100Base-TX implementations. This low-power idle can reduce the operating power of the board's five Ethernet ports, which can be helpful when managing a tight power budget.

At a TDP of just 6 W and a 105° maximum CPU junction temperature, the Intel® Pentium® Processor N4200 can run in a fanless configurations—even in outdoor applications. This capability is demonstrated by the LEX Computech TASK series (Figure 3), which brings SBC functionality into a compact chassis (77 by 210 by 125 mm) that can operate in temperatures ranging from -20°C to +70°C. 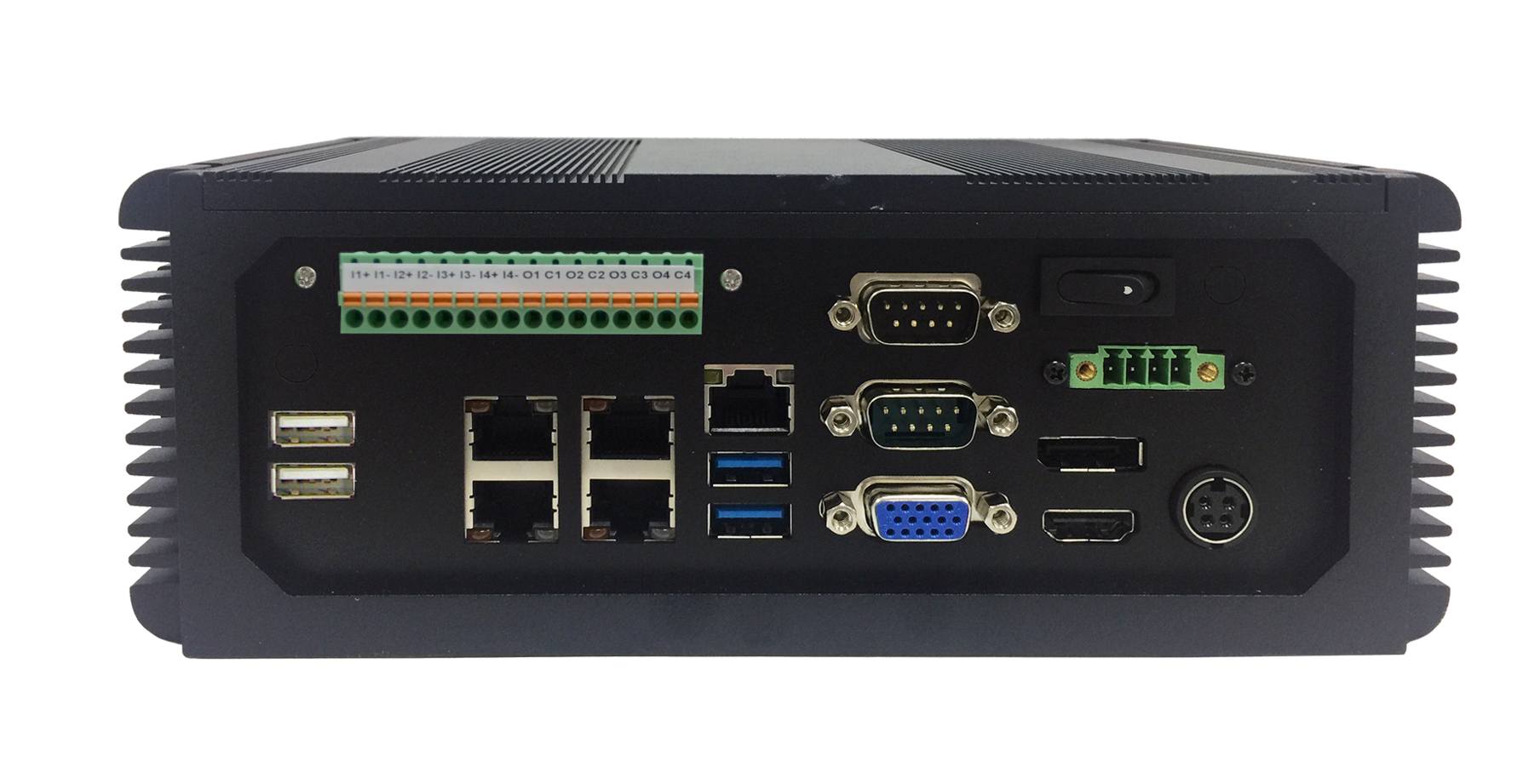 Power over Ethernet can lower the material and installation cost of deploying devices in a facility. It can also make it possible to install PoE-enabled appliances in locations without access to AC power. Single board computers like the 3I390NX provide integrators with an off-the-shelf alternative that provides motherboard functionality ideal for embedded applications using PoE.