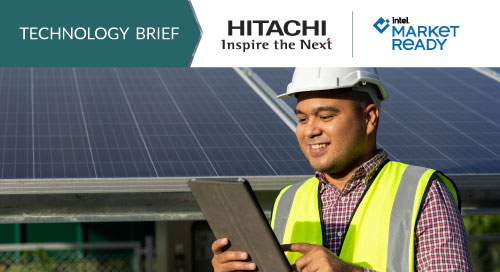 In March 2022, vandals created havoc in an Oklahoma electrical substation when they damaged a transformer and cut off power to thousands of residents. This is just one example of the many intrusion incidents U.S. utilities deal with constantly, causing between $250,000 and $1 million in damages annually.

And intrusions are not the only challenges utilities face. The power utility industry deals with a range of complex challenges that put an immense strain on one of their most valuable assets—operations.

The State of Today’s Critical Infrastructure

First, there’s the problem of aging infrastructure. A whopping 70 percent of power transformers and transmission lines in the U.S. are older than 25 years. And 60 percent of circuit breakers are 30 years or older, according to John Smerkar, Global Director of Smart Spaces and Lumada Video Insights Marketing at Hitachi Vantara, a leader in IoT and digital innovation.

The creaking infrastructure could not be coming at a worse time. Accelerating climate change is straining the system, leading to more frequent high-impact storms and more extensive damage as a result of each storm.

But not only is the infrastructure outdated, so is the process to maintain and manage it. Much of the infrastructure inspection process is still manual—which means by the time operations teams catch any problems or issues, it’s already too late.

All of this results in increasing frequency and length of outages. For instance, U.S. customers on average experienced more than eight hours of outages in 2020.

And demand for electricity is also expected to increase with the move toward electric vehicles—a 38 percent increase in the U.S. is expected by 2050—placing constraints on critical infrastructure.

Sealing off the challenges is the industry’s talent shortage. More than a third of the country’s 400,000 electric utility employees are headed for retirement, Smerkar explains.

As a result of these complexities, utility organizations struggle to manage and monitor their critical assets.

“COOs are asking, ‘Which core assets of my critical infrastructure are going to fail?’ ‘How will I continue to reduce my operational cost while increasing my inspection frequency?’” Smerkar says.

Given that the pressures are relentless, power utilities could use a smarter approach to resource allocation. The answer: intelligent infrastructure monitoring.

Intelligent infrastructure monitoring leverages AI and #video #data and moves it into the realm of analytics to help #utilities get ahead of problems. @HitachiVantara via @insightdottech

Today, most power utility stations monitor their facilities using video cameras. The problem is that the traditional way of using these closed-circuit televisions (CCTVs) is not an effective deterrent.

For example, maintenance staff are not always aware when intruders enter restricted areas and realize the problem only after the damage has already been done. Similarly, utilities cannot accurately predict when a circuit breaker is about to blow. Traditional methods merely help in forensic analysis after intrusions have occurred or when a circuit breaker has already malfunctioned.

Intelligent infrastructure monitoring leverages AI and video data and moves it into the realm of analytics to help utilities get ahead of the problem.

For example, with the Hitachi Intelligent Infrastructure Monitoring solution, utilities can cut down on intrusions like the one in Oklahoma. They can monitor sites and equipment from virtually anywhere. Intruders crossing into restricted areas are recorded and authorized staff are notified for immediate action.

In addition to monitoring for intrusions, utilities can conduct remote monitoring and inspection of assets and move on to autonomous operations in the future. With the solution, they can check into the health of each substation more frequently, and with advanced video capabilities inspect critical infrastructure at all angles by panning, tilting, and zooming in. This allows them to conduct preventive maintenance of assets before problems escalate into malfunctioning equipment and cause days of power outages.

In essence, utilities are finding that they can bank on a familiar entity, video data, and use it more proactively to solve their most pressing challenges, instead of traditional methods that enable them to react only when something has already failed.

So promising is this approach that the surface inspection and vision market is forecast to increase at a compounded annual rate of 7.13 percent and reach $5.95 billion by 2028.

Putting the Pieces Together

Improvements in technology have been spurring growth in the surface inspection and vision sector, according to Smerkar. “The reason behind the overwhelming effectiveness of intelligent infrastructure monitoring is that artificial intelligence and machine learning and computer vision have been making impressive strides as well,” he says.

As part of intelligent infrastructure monitoring, power utilities use the live streams from their CCTV feeds as video data, along with additional data gathered from humans, drones, or robots. Utilities also conduct regular thermal scans on assets to ensure critical equipment is not overheating and at risk of failure. Data from these various edge points feed into the cloud for processing. Hitachi delivers insights from these analytics through its visualization suite.

In addition, they can receive notifications when a reading from a particular piece of equipment is out of its normal operating range and drastically reduce system downtime. Equally important, says Smerkar, “all insights are through a single pane of glass.” Whereas before operators had to log into multiple systems to keep track of equipment, the visualization suite corrals all real-time data insights into one place.

The video data-driven solution need not be restricted to use cases for electricity substations alone. “Critical infrastructure is everywhere,” Smerkar says. “It could be roads, highways, bridges, stadiums. The same principles apply,” he adds.

Hitachi’s Smart Spaces, which is part of the Intelligent Edge program, uses video insights (SSVI) to monitor and inspect assets across a variety of “spaces”—airports, bridges, stadiums, theme parks, and in multiple industries like healthcare, education, and manufacturing. For example: “Putting a camera in front of a rail car as it rolls along the rail helps look for cracks,” Smerkar says. Using video data allows a variety of industries to “see” where the fault lines lie.

The key word in all of this is “intelligent,” Smerkar says. “Instead of having workers going out and performing inspections on assets that don’t need to be monitored right now because they’re in good health, we can have them tackle critical infrastructure that is close to end-of-life, where they need to fix or replace these units to prevent downtime,” he adds.

Using the resources you have strategically instead of a one-size-fits-all approach is a proactive way to meet challenges head-on. And with increasing strains on aging infrastructure, these prescriptions come not a moment too soon.