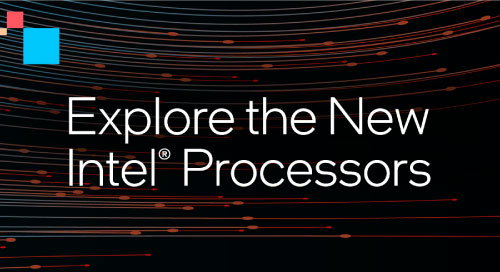 Intel® made big news at CES 2022 with the launch of their 12th Gen Intel® Core™ Desktop and Mobile processors, formerly known as “Alder Lake”.

What makes these chipsets groundbreaking compared to previous-generation processors? First, increasing workload diversity—driven by the demands of IoT, AI, and visual edge computing—means we need enabling technologies that are more flexible. And this new reality calls for a brand-new approach to processing.

The 12th Gen Intel® Core™ processors introduce a hybrid core architecture across Desktop and Mobile SKUs for the first time in x86 history. Here’s what you need to know:

New Hybrid Core Architecture: The Benefits Are in the Benchmarks

The new hybrid architecture is built with both Performance- and Efficient-cores, combined to deliver Intel’s biggest desktop performance gains in more than a decade—without sacrificing additional power. Want proof? Check out these benchmarks in Figure 1.

With as many as eight cores of each type—supporting multiple execution threads—developers can consolidate multiple workloads on a single device. For example, a modern POS system could analyze video and run price checks using object recognition algorithms on Performance-cores while the Efficient-cores simultaneously read barcode scans, tally receipts, and accept payment.

Check out this video highlighting all the goodness of the 12th Gen Intel Core processors, from performance to graphics—from media to AI.

In a demo at CES, the 12th Gen Intel Core Desktop processors’ four video outputs are synchronized into a continuous large image of a video playlist that spans the four-screen display at 4K resolution. But there’s a lot more going on beneath the surface. New IoT features like Genlock and Pipelock will be key components of the video wall designs of the future.

And although they’re obviously tailored to digital signage, these features represent just a fraction of the capabilities introduced on 12th Gen Intel Core processors.

Available Now for the IoT Edge

Digital signage like the demo video wall can be built on solutions such as Shenzen Decenta Technology’s new Mobile Series-based OPS Module. It sports Intel® Wi-Fi 6E and USB4 interfaces, plus local AI inferencing via the Vector Neural Network Instructions (VNNI). AI workloads on all 12th Gen Intel Core processors can also be accelerated by the Intel® OpenVINO™ Toolkit.

Any developer can use the Intel® oneAPI Toolkit to harness the hardware-accelerated features mentioned above from the friendly confines of their software stack. And it’s easy to get these stacks initialized thanks to native support for robust software offerings, including the UEFI BIOS Slim Bootloader, hypervisors, multiple Linux distributions, and the Microsoft Windows 10 IoT Enterprise 2021 Long-Term Servicing Channel (LTSC).

It’s all ready for you out of the box.

As more, different types of objects leverage electronic intelligence, workloads are changing, and the emphasis is shifting from having the most processing to the right processing. Developers have been waiting for hardware that offers a path forward, and 12th Gen Intel Core processors deliver.

Read about advances in visual computing driven by the Intel OpenVINO Toolkit in Intel Innovation: The Event Designed by Developers for Developers.

2 Performance results are based on testing as of dates shown in configurations and may not reflect all publicly available updates. For more complete information about performance and benchmark results, visit intel.com/PerformanceIndex.