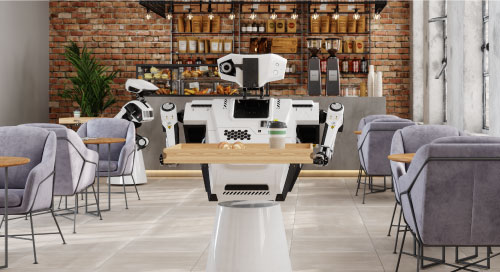 In the classic TV series The Jetsons, the title characters employ a robotic housekeeper called “Rosey” who also serves as an impromptu home security system and companion. While The Jetsons takes place in a future that’s still four decades from now, forward-thinking technologies like Rosey are already becoming a reality.

A great example is RoomieBot, a mobile service robot that uses AI at the edge, machine vision, and natural language processing (NLP) to autonomously navigate and interact with humans in healthcare, retail, and hospitality settings. And it’s not a stretch to imagine these robotic AIs puttering around as home assistants in the next few years.

Determining the best way to deliver these features begins with understanding the current state-of-the-art technology—both its advantages and limitations.

But as organizations look to scale the production of these systems for mass market deployment, there are opportunities to upgrade the stack for improved performance per watt and streamlined integration.

Most notably, these can be achieved by adopting 12th generation Intel® Core™ processors, formerly known as “Alder Lake”.

High-Performance Processors Don’t Have to Break the (Power) Bank

The performance gains are the result of eight additional cores (12 total) on the new processors. But these aren’t just any cores. 12th gen Intel Core processors are the first to introduce a hybrid core architecture consisting of traditional Performance CPUs and a new class of Efficient cores. The Efficient cores are optimized for less computationally intensive workloads like system management and control tasks.

All that added horsepower comes at a minimal power tradeoff, as the Intel® Core™ i7-12700TE processor features a base TDP of just 35W compared to the 28W TDP of the 8th generation mobile processor examined previously. For mobile service robots, this facilitates the execution of sophisticated edge AI stacks without instantly draining onboard batteries.

Smarter Integration Out of the Box

The ability to seamlessly integrate 12th gen Intel Core processors into a variety of different mobile service robot architectures is another crucial consideration for mass production and deployment.

For example, the MIO-4370 from Advantech, a leader in embedded and automation solutions, supports 35W 12th gen Intel Core Desktop processors with up to 16 hybrid cores and 24 execution threads. Designed to the 4” EPIC size 165 x 115mm (4.53” x 6.5”), the small form factor single-board computer provides OEMs and system integrators a rugged edge intelligence module with all the I/O needed by modern mobile service robots, such as:

Because IoT edge use cases like mobile service robots consist of so many disparate applications and functions, the Advantech SBC has been pre-certified to work with Canonical’s distribution of Ubuntu Linux that enables containerized application development. Each container comes with its own system image, so mobile service robot programs can be coded free of dependencies or worries about other system requirements. This reduces development time and complexity, but also potentially speeds compliance efforts since changes to each container can often be certified individually once the whole system is approved.

Integration is further simplified by tools like the Advantech iManager 3.0 that offers APIs for controlling I/O from the user OS. Advantech’s Edge AI Suite and WISE-DeviceOn goes even further, providing a user-friendly SDK based on the Intel® OpenVINO™ Toolkit that lets engineers optimize and deploy deep-learning models to targets like 12th Gen Intel Core processors.

Mobile Service Robots: Out of the Factory and into the Family

In all, platforms like the MIO-4370 are more than just intelligent robotic controllers. They are building blocks for advanced mobile service robots that are higher performance, lower power, faster to develop, and more cost-effective than ever before.

Put simply, these integrated solutions are a precursor to scaling advanced mobile service robots for mass production. And subsequently, a future where having your own Rosey isn’t just reserved for a select few.

Thanks to highly integrated development environments, that future is closer than you might think.