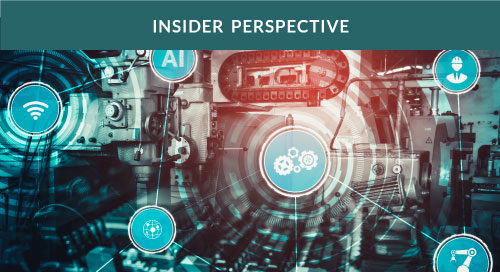 As the world becomes increasingly digitalized, it is becoming increasingly difficult to smoothly integrate technology into every aspect of an industry. For instance, IT and OT teams don’t always share a lot of context in the manufacturing world. But digital transformation isn’t going away. So is there a way to bridge the gaps between the engineers, the operators, and the people who hold the purse strings?

We talk to Bryan DeBois, Director of Industrial AI at RoviSys, a leading automation and information solutions provider, about the reality of digital transformation in an industrial setting. What can digital transformation bring to the shop floor? What are the pitfalls to avoid? Where does AI fit into the concept? And how can you get your team to buy in?

What does digital transformation mean in a manufacturing context, and why is it important?

The way I look at it is there is still so much room to grow in manufacturing. There’s so much value that digitalization can bring to manufacturing because we’re typically five to seven years behind the times in terms of adoption of technology. Our industry is highly risk averse, so they’re not going to adopt the bleeding-edge technology. All those things combine to bring about a great opportunity for digitalization.

Also, unique to manufacturing, is this idea of legacy equipment. We regularly see equipment that is 15, 20, 25 years old. We have a customer right now that is operating a generator that was actually installed by Thomas Edison. So that’s about 100 years that this generator has been operating. But it’s still there, it’s still running, and we’ve instrumented it and we have control over it. We’ve got modern tools around it, but there’s just not really a compelling case to replace that generator for that customer at this point. And that’s the case we see with a lot of customers.

I know for me, personally, I think that manufacturing is the lifeblood of any economy. The fact that we have so much available to us that’s of higher quality—and it’s cheaper and it’s prevalent—is a direct result of our ability as humans to manufacture things and to produce products of high quality. I really see it as a deeper need as a society because that’s what raises the bar and the quality of life for everyone, frankly.

#Digitalization is the path to make #manufacturers more productive, more efficient. And frankly, also to make the lives of those folks who actually operate the plants better. @rovisys via @insightdottech

And I strongly believe that digitalization is the path to make manufacturers more productive, more efficient. And frankly, also to make the lives of those folks who actually operate the plants better. Nobody wants to compile Excel reports. If I can put in a logging function that automatically records all those values—besides the fact that you’re going to get more accurate data out of that equipment—that’s just a better situation for the operator. They can stay focused on what they typically like to do, which is operate the machinery.

Ultimately, what we’re trying to create is a data-driven culture. We worked with a company that presses aluminum wheels. They were focused on continuous improvement, and they had dollars allocated every year for continuous improvement. But often those dollars simply went to the loudest voice in the room. But they said that after we were there and we did this project with them, those funds, those limited funds, would now go to whoever had the best data story.

What is the overall state of digital transformation in the industry, and what are some common pitfalls?

I definitely think that we’re past the hype cycle now, in digital transformation, and we’re unfortunately starting to see some of those early projects fail. I think that there’s definite trepidation around this.

The first pitfall is that companies don’t start small. We are very big on “walk before you run,” or “phased approach,” or whatever you want to call it: small projects, small wins, and getting that momentum going. Then roll that into the next project, and the next project. That’s where we’ve seen the most value; that’s where we’ve seen the most progress.

And as you’re defining those smaller projects, you need to be tying them to use cases. So what we do is we put the problem first and we prioritize that. We say: “What’s the most important problem that we can solve with a certain budget, with a certain constraint, on a timeline?” And then we go and solve that problem with technology.

Can you talk about the process: How can a manufacturer successfully start and navigate a digital transformation journey?

We have what I would call a loose path that we typically follow, which is proven, and seems to be the right way to approach these digital transformation projects.

The first thing we’re going to look at is their OT data infrastructure. And we think a historian is such a critical, foundational part of that. So that’s typically the very first thing we ask: “Do you have a historian? Is it comprehensive?” Because another thing that historians do is they become that OT data infrastructure, and then it becomes a common platform to query. As part of that, there are typically networking upgrades that must happen, too.

Then, the next thing we look at is OEE—availability, throughput, and quality. It’s one of the easiest and most approachable ways to start on a digital transformation journey. And along with OEE comes visibility. So many of these projects—once we’ve put in a historian for them and we’ve got some displays that visualize their process—that’s transformative. Sometimes that in itself can lead to so many wins.

Where and when does AI enter the picture?

I just mentioned the carrot that we dangle for IT, which is unlocking this data on the plant floor. So AI then becomes a further carrot. Sometimes it’s a little frustrating being in the role that I’m in because you talk to customers, and they’re super excited to talk to you about AI, and they’ve got big vision about what they want to do around analytics. And unfortunately, then you look at their data infrastructure, and you’re like, “Wait, you’re not anywhere near where you need to be in terms of OT data infrastructure to take advantage of some of this AI stuff.”

Because one of the things that AI needs to feed on is data, and it needs lots of data. And not only does it need a ton of data, but it also needs very, very clean data. That’s just not what we find. And so I tend to have to be the bearer of bad news that there’s a lot of foundational work that we’re going to have to do before we can really take advantage of some of this AI.

And one of the other aspects of AI that I like to emphasize is that all that work that I just described, all of that—you’ve made no money at this point off of it; that was all invested dollars. Until an operator, a supervisor—someone on the plant floor—is making decisions based on the predictions of that model, you haven’t seen a dime from your investment. Everything up to that point has been a giant science experiment. And so it turns out that operationalizing the AI is actually the hard part.

And that’s the part that we’re focused on. In our division we’re trying to marry 30 years of plant-floor experience and information-solution experience with the AI and the data science. And that, I think, is where we’re going to move the needle—focusing on how we actually put those AI systems into operation on a plant floor that has to run 24/7, with operators who often may not trust that AI versus their own eyes, ears, and smell that they’ve developed over many, many decades.

How do you get all these stakeholders aligned on the digital transformation goals and processes?

If you’re leading with use cases, you’re going about it the right way. Start with first identifying what the problems are. And then prioritizing those problems that are the right combination of achievable in a certain amount of time—that are maybe the least expensive to try to bite off but have the biggest impact. We want to identify those pretty early on.

The second thing that we do is, we’ve got ideas about what projects are going to have the biggest impact. So now we take a couple of those off the top, and we go around and do an assessment. We talk to all the stakeholders—we talk to maintenance, we talk to management, we talk to operations—we talk to everyone involved, and we talk about those specific couple of use cases that we’re going to pursue.

We talk about what data we need to make that project a success. What data can your systems contribute to this? And what kind of organizational change management is going to be required to change the way that we operate in this future state? We capture all of that into an assessment.

And then typically we’re getting in front of the purse-string holders, and now we’ve got all the documentation—we’ve got a pretty clear plan of how to get from A to B. Again, we’re focused on specific solutions—forget digital transformation and all of the buzzwords. Here’s a problem you have, and here’s a road map for a solution that would solve that problem, and here’s roughly what it would cost.

And when you lay it all out like that, it’s actually pretty easy to get everyone on board, to get everyone excited, and to get those purse-string holders to say, “Okay, let’s do it. Let’s try this first one.”

How do you see technology helping these digital transformations along?

It’s been really exciting to see the advancements that have happened even in the past five years in this space. And Intel®, of course, is leading the charge on a lot of that. Obviously, you’ve got the edge play, the IoT play—more and more smart devices everywhere. The focus right now seems to be on vision. And there’s a lot of value that computer vision can bring to a manufacturing facility.

But what I’m excited about is what’s next. Where do we start to see some dedicated hardware for processing AI workloads outside of vision? Because that’s going to be really exciting. You also have the cloud to roll out these really big OT deployments, and of course I know that Intel makes a big impact there, too. I think that they are really pushing the envelope on what’s possible.

Any key takeaways to leave for those who might be thinking about embarking on a digital transformation effort?

My pitch has always been: involve OT early. A lot of these projects nowadays are being driven almost exclusively by IT, and that makes a lot of sense for a number of reasons. But it’s so critical to get OT to the table early.

We have a great amount of knowledge about the different technologies and platforms and things that are out there, so we can definitely help guide during the ideation process. We can guide the conversation on what’s feasible, and what’s not, where the lowest-hanging fruit is.

Start small, focus on use cases, and build that business case early on—and get those wins. Build that momentum, and start to develop that culture for digital transformation.

To learn more about the digitalization of industrial operations, read Demystifying Digital Transformation for Manufacturers and listen to our podcast on Creating a Data-Driven Manufacturing Culture with RoviSys. For the latest innovations from RoviSys, follow them at Twitter at @RoviSys and on LinkedIn at RoviSys.