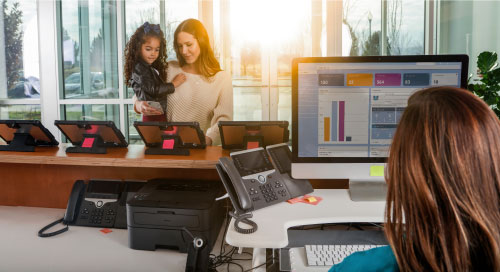 So you walk into a doctor’s office and are greeted by—a kiosk?

Such is life in the post-pandemic 21st century, where every process is tech-optimized, and every person is germ-aware. And where, if done right, a kiosk can be both.

More and more, self-service kiosks are integrating sensory capabilities that make them more “service” than “self.” For instance, recent advancements in computer vision now allow kiosks to “see” the subjects of their interaction and, in some cases, even detect human emotion. There’s also touch sensitivity, which most kiosks already support as an input.

But by far the biggest gains in human-machine interaction over the past several years have come from natural language processing (NLP) services. Now, integrated voice control engines permit self-service kiosks to offer hands-free input for those unable to see or touch equipment or in situations when doing so is undesirable.

And these voice services can support processes like patient check-in from end to end, which is also a big win for the healthcare infrastructure at a time when medical staff are overwhelmed by high numbers of patients and salaries are on the rise.

Not only do voice services make kiosks a suitable substitute for regular staff, but in many cases, they perform at least as efficiently as human personnel and carry far less risk of spreading illness (Video 1).

“Instead of going up to a receptionist and having to wait around for them to finish the phone call or finish entering whatever they need to do on the computer, patients can just go up to the kiosk. In the same way they would do when speaking to a receptionist, they just say their name or date of birth and get themselves checked in,” says Salwa Al-Tahan, Research and Marketing Executive for Sodaclick, a digital content and AI experience company.

But while the addition of conversational AI certainly makes self-service kiosks “smarter,” they can’t simply be plugged into the surrounding infrastructure and work. It’s important to note that the kiosk itself is just the front end of a much more intricate, cloud-connected system.

While the kiosk interface must be intuitive and engaging, most of the conversational AI processing in systems like a healthcare self-service kiosk doesn’t take place on the kiosk at all. User voice inputs are captured by the kiosk on the edge, but then transmitted to cloud-based automatic speech recognition (ASR) and NLP models that perform a few steps in quick succession.

Early in the process there can also be a confirmation step where the cloud models confirm the received voice input with what was captured by the kiosk. But clearly, most of the intelligence is remote from the front-end user interface, and connecting it with voice services and databases containing relevant data like patient and schedule information requires significant integration work.

Combining all this technology, tuning it to a specific use case and technology environment, and doing so without violating HIPAA or GDPR regulations, is beyond even the most advanced hospital IT staff.

“We’re not asking customers to get rid of their current self-service kiosks and buy new ones, but rather upgrade by adding the voice layer with our SDK solution. You can get the SDK, work with our development team, and deploy voice AI ready solutions very easily,” Al-Tahan explains.

Sodaclick offers the SDK with support for more than 85 languages through its partners like Arrow Electronics, an Intel® Solutions Aggregator. With all the components of an immersive kiosk, the Healthcare Voice AI Assistant can identify event triggers and convey custom voice messages in real time.

Aside from the SDK, the Voice AI Assistant can include:

The Sodaclick content creation platform allows visual display content to be created and updated on the target kiosk in real time. And the AI Voice SDK integration with the front-end application helps support connections with the voice AI service and patient check-in databases for a seamless user experience.

The entire system is based on a containerized Docker architecture, which keeps applications and data segregated from each other. It doesn’t record or log any data, but rather pushes requests and responses across a microservices architecture using the Intel Edge Software Hub.

With built-in considerations for security, connectivity, and latency, the Edge Software Hub helps keep operations flowing and reduces the risk of compromise by orchestrating data flows on private servers behind hospital firewalls.

Conversational AI at Your Service

The healthcare space is just one market where Sodaclick’s Voice SDK is already in operation. Grocery stores and quick-service restaurants are also leveraging the technology, an indication that conversational AI is already penetrating entire swaths of everyday life.

With health consciousness on the rise and changing work preferences, you’ll probably be serving yourself more often. But don’t worry, you’ll have help from talking kiosks.

“Voice is the future. And we will be seeing a lot more deployments in all sorts of settings. Everyone’s just been scratching at the surface till now,” says Al-Tahan.

This article was edited by Christina Cardoza, Associate Editorial Director of insight.tech.