According to the report "Edge Analytics in the IoT," organizations use only 10% of the data generated by the IoT. Even less undergoes deeper analysis. A big part of the problem is transporting all this data across the network. Limited bandwidth means that most IoT data will inevitably remain trapped at the edge.

The situation inspired the emergence of fog computing. Fog computing emphasizes the execution of analytics as close to the point of data origin as possible. In doing so, decisions are made with lower latencies without straining network bandwidth.

To make full use of the technique, analytics intelligence must be redistributed from the cloud to the edge. This implies a redistribution of processing resources, or dual-use application of existing resources between sensors and the cloud.

While many nodes along the way—such as routers and gateways—already have advanced processing and memory resources, other nodes are more constrained. In particular, sensors and other devices at the edge of the network are constrained by cost, power, and space limitations.

Consequently, IoT gateways are often the first place analytics can be performed. Gateways serve this role for two reasons. First, they offer sufficient performance and memory. Second, they merge sensor data from multiple heterogeneous networks and can therefore analyze and act upon multiple data inputs and sources.

This ability to ingest data from multiple sources is no small feat. Many IoT networks encompass Modbus, Ethernet, zigbee, Bluetooth, Wi-Fi, and cellular networks, among others. As a result, gateway analytics depends not only on a gateway's performance, but also on creating software stacks that can manage multiple protocols.

The Greenwave Systems AXON Platform for Analytics was created to make this task simpler. A self-contained analytics engine, the platform lets OEMs and enterprises capture, analyze, and act on real-time performance data anywhere in the network.

IoT devices such as industrial controllers can employ a version called AXON Predict (Figure 1). This software embeds directly on a device to perform constant monitoring and react accordingly. It features the ability to send texts or call employees directly if noteworthy events take place, as well as self-healing capabilities to prevent asset failure. 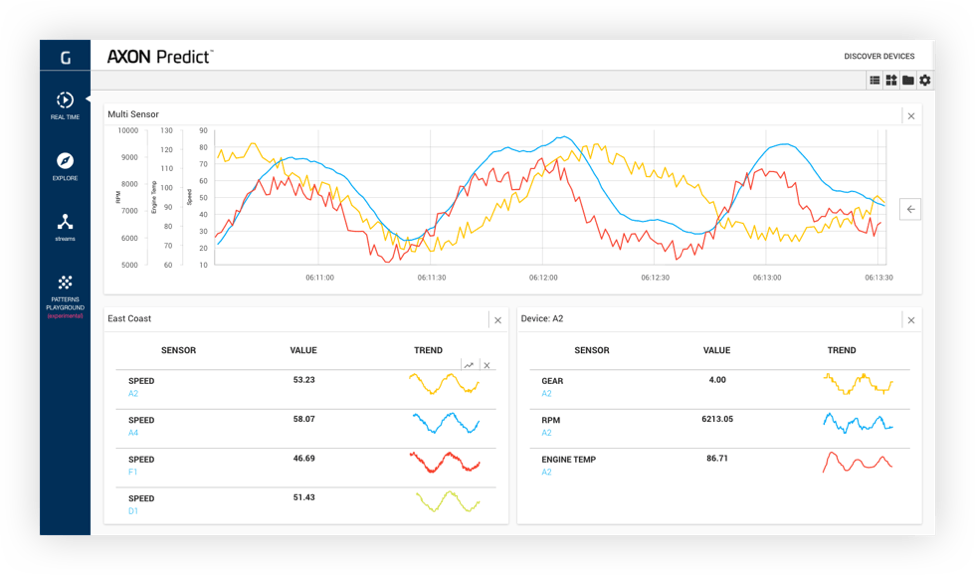 Moving further up the network, IoT gateways can use Predixion RIOT One, which connects to thousands of devices with minimal configuration and setup. RIOT one is in turn pre-integrated with connectors for Wind River Helix Device Cloud, enabling simple cloud connectivity.

Solving the connectivity problem, Greenwave's AXON Platform for IoT complements the company's Analytics solution by performing the required translation of communication from a variety of devices into a common IP-based language.

In addition, it scales to provide single-source management across different devices or features across networks, from advanced wireless gateways to Wi-Fi routers, remote controls, power outlets and sensor-enabled lights, speakers, or occupancy sensors.

With AXON Platform for Analytics and also for IoT, it's now possible to add intelligence at every level of the network, which helps to solve expensive problems like unplanned downtime and empower end-users and manufacturers with real-time insight.