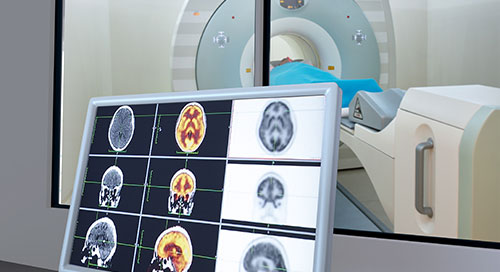 To help with the situation, systems with massive imaging workloads, such as MRI and CT scanners, are relying upon GPU arrays to harness the efficiencies of parallel processing. The presence of multiple GPUs also opens the opportunity to apply technologies such as artificial intelligence (AI) and computer vision (CV) to provide even more insight to medical images. These capabilities can be used to detect anomalies in images, cross-reference image records, and better inform physicians by suggesting possible diagnoses or potential prognoses.

Still, all-in-one standalone and cart-based imaging systems typically have a TDP target of 35 W to 50 W. Of course, making these systems as small as possible is another design goal. All of these factors make packing as much graphics performance as possible into imaging systems a challenge.

To effectively respond to these requirements, medical system designers need more advanced processing supported by faster memory. This must be delivered in modular form factors that meet TDP budgets.

“To efficiently handle these increasing workloads, imaging applications today rely on parallel computing leveraging the multicore capabilities of the CPU as well as the compute units of the graphics processing units as a GPGPU,” said Franz Fischer, Director of the Technical Service Center – Americas for congatec AG. Fischer added that due to its massive parallelized compute units, Intel® UHD Graphics 630 can be used as a GPGPU and also has the capability to replace proprietary and therefore complex FPGA and ASIC-based designs.

“In larger applications such as stationary MRI scanners and CTs, only the computing power counts,” said Fischer. “These systems call for massive computing power with an array of several GPGPUs. However, a powerful, embedded computing core with the latest 8th generation Intel® Core™ processors can be used to orchestrate these GPGPUs.”

Intel® UHD Graphics 630 is an integrated graphics processor in Coffee Lake microarchitecture-based processors that provides 24 execution units and facilitates 2D and 3D graphics rendering through standards such as DirectX and OpenGL. UHD Graphics 630 also includes support for technologies such as Intel® Quick Sync Video and Intel® Clear Video HD, which accelerate video codecs in hardware to enable 4K UHD streaming and 360-degree viewing capability. Designed for high-performance gaming, these capabilities now allow medical imaging professionals to not only examine organs in real time, but to do so from multiple perspectives.

Another key upgrade in 8th generation Intel Core processors is an increase in the maximum number of cores-per-processor, from four to six. Each of these cores supports multithreading using Intel® Hyper-Threading Technology (Intel® HT Technology), effectively doubling the throughput of parallel processes at the CPU level. This feature is particularly relevant for medical imaging systems connected to the Internet of Things (IoT), as it both improves performance and enables virtualized applications to be consolidated on a single hardware platform.

“With multithreading on a six-core processor, for example, you can define one eight-thread computing instance on four cores and use the remaining two cores in a virtualized real-time environment based on the RTS Hypervisor to deliver four parallel threads for a Time-Sensitive Networking (TSN) Industry 4.0 machine, HMI gateway, firewall, and virus scanner,” Fischer added.

To support these performance upgrades, 8th generation Intel Core processors also include a twofold memory update. The first of these is Intel® Smart Cache, which establishes a shared Level 2 or Level 3 caching space between all Core™ processor CPU cores and the integrated UHD Graphics 630 GPU so that data can be accessed as quickly as possible (Figure 1).

“A powerful cache system like the Intel Smart Cache that works on both the CPU as well as the GPU is decisive for optimizing the data flow,” Fischer said. “It helps to accelerate the data exchange from the memory to the CPU and the GPU, and if the same data is processed by both the CPU and GPGPU, it can drastically accelerate computing processes as the data stays within the SoC and does not need to be written and retrieved from slower main memory.”

The second memory improvement on new Intel Core processors is support for Intel® OptaneTM Memory, which is based on advanced 3D XPoint non-volatile memory (NVM) technology (Figure 2). Intel Optane is a technology unique to Intel that accelerates storage access by keeping frequently accessed data on the fastest storage tier, providing three orders of magnitude lower latencies than standard HDDs. As a result, relevant information can be applied to, or combined with, medical image sensor data in real time to better inform healthcare personnel. 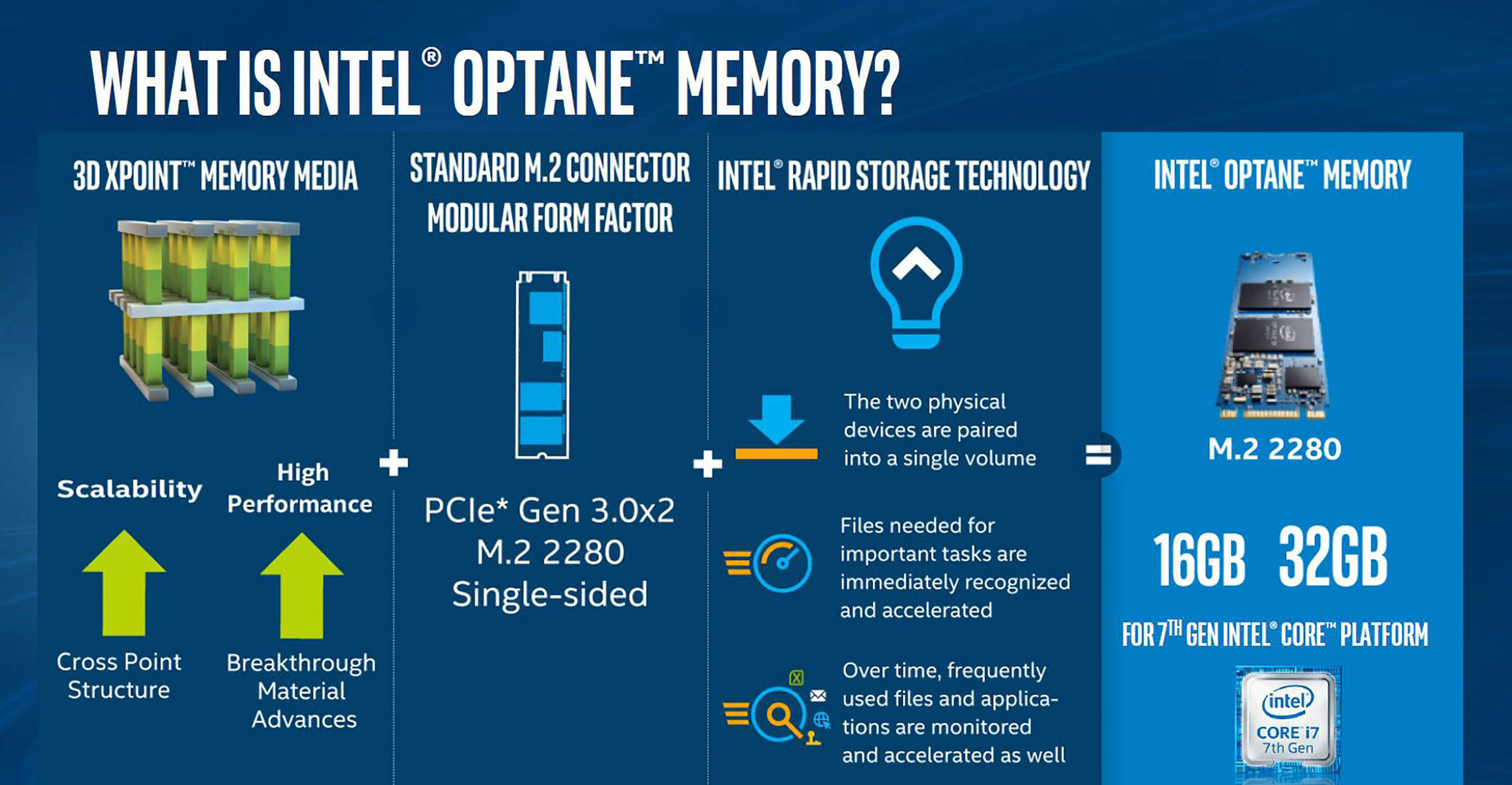 “Compared to NAND SSDs, Intel Optane offers significantly lower latency yet is capable of handling data packets of the same size,” said Fischer. “With a latency of just 10’s – about a thousand times lower than that of standard HDDs – the boundaries between main memory and storage are becoming indistinguishable.

“This makes Intel Optane especially well-suited for medical imaging applications that use high-performance computing and virtualization along with big data analytics and artificial intelligence through deep learning,” Fischer added.

The combination of the memory and compute improvements in 8th generation Intel Core processors yield a 40 percent performance increase over previous-generation processors. This is available in six-core SKUs such as the 2.6 GHz Intel Core i7-8850H with a configurable TDP (cTDP) of as little as 35 W.

8th generation Intel Core processors are compatible with the COM Express specification, which assists medical system engineers in the design of compact, long-lifecycle products. For example, COM Express “Basic” form factor modules are almost half the size of competing embedded board standards, allowing systems to pack the performance per watt (PPW) of 8th generation Intel Core processors in a small-footprint design. Imaging systems built around the COM Express specification can also have the underlying carrier board certified once for medical use and swap out COM Express processor modules as performance and system requirements evolve.

“The overall carrier board and module combination can have a footprint as small as the COM itself, meaning dimensions of only 95 mm x 115 mm for the COM Express Basic,” explained Fischer. “By comparison, a Mini-ITX motherboard requires almost twice as much space, with a footprint of 170 mm x 170 mm.”

“If engineers utilize standards such as COM Express, they also benefit from extensive documentation of the standard, which is already certified in many medical applications, making the design-in and certification process a much easier task compared to any fully customized design,” Fischer added.

The conga-TS370 COM Express module from congatec is one option for medical system designers and engineers that supports 8th generation Intel Core and Intel® Xeon® processors in the Basic form factor (Figure 3). The modules come with 10-plus years of support guaranteed. 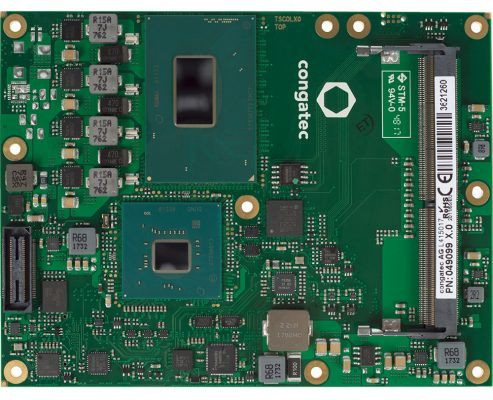 Medical imaging systems are one of the primary tools healthcare professionals use to diagnose disease, as they are faster and less obtrusive than other methods. But these systems are only as beneficial as the images they are able to render, which places a significant burden of responsibility on the processing solutions that power them.

With the availability of 8th generation Intel Core processors, medical imaging designers can capitalize on advanced graphics performance in TDP envelopes that don't break the power bank. In conjunction with leading-edge memory technologies and off-the-shelf processor modules, these solutions are paving the way for a more intelligent age of medical imaging that incorporates big data, IoT, and AI for improved patient care.