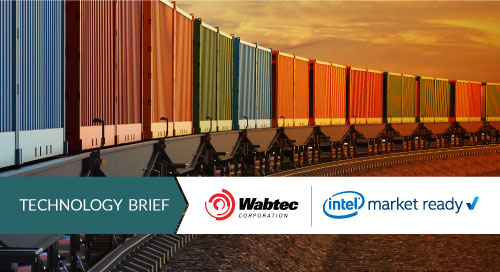 It’s been nearly 200 years since trains became a major force in moving people and freight across long distances. While vast improvements have been made in the engineering of both trains and track, some of the fundamental challenges remain the same.

Technology has played a huge role in helping to answer these questions. Investments in infrastructure, equipment, and network architecture have allowed the freight rail system to become more efficient than ever.

The endless number of devices—measuring speed, vibration, telemetry, brakes, and more—creates a big opportunity for operators. Real-time visibility into a train’s systems means quicker decisions and predicting problems before they arise.

But even though the rail system produces abundant data, there are still big challenges. The smartest locomotives have hundreds of sensors capable of processing more than a billion instructions per second—and all that data easily outstrips the capabilities of traditional business intelligence and analytics tools.

Another problem: Traditionally, collecting train data has involved intermittent connectivity, a mix of legacy systems, data silos, and batch processes that typically happen only when the train is in the service yard. Turning that data into valuable insights is difficult when it’s not available or designed to be acted on in near-real time.

The smartest locomotives have hundreds of sensors capable of processing more than a billion instructions per second. @insightdottech @wabteccorp

EdgeLINC, an IIoT platform for transportation, is solving the device and data connectivity challenge. Developed by GE Transportation, a Wabtec Company, the platform powers a number of applications such as train telemetry that provides location, health monitoring, onboard rules, and edge analytics. This adds up to reduced operational costs, improved train handling, and higher asset utilization.

The EdgeLINC gateway, powered by Intel® technology, is deployed on the train—putting powerful real-time analytics and edge computing power where the data originates. “We want to give customers actionable information they can use to better manage the physical world in real time and improve industrial performance,” said Adebayo Onigbanjo, Principal of IoT Platforms and Applications at Wabtec. “But it takes a tremendous amount of power and insight to run sophisticated operations at the edge.”

The connected devices that EdgeLINC supports include sensors that measure temperature, fluid levels, fuel management, brakes, and much more. Wayside assets gather and report on switch operations, track vibrations, and real-time warnings of system failure along the line. On the train, personnel can access data via on-board smart display terminals and on mobile devices used by the crew (Figure 1).

EdgeLINC lets companies choose which data is analyzed at the edge immediately and which can be sent to the cloud later—reducing cellular and other network costs. A bigger driver in choosing edge-level computing is the ability to take action on data immediately. The analytics on factors that are most likely to stop a train—locomotive telemetry, brakes, fuel monitoring, and train-handling alerts—have priority for real-time visibility, since a stoppage can result in millions of dollars of assets sitting idle (Figure 2).

Because so much sensor data is increasingly image heavy, underlying EdgeLINC Gateways are the Intel® Movidius™ Vision Processing Unit (VPU) and the Intel® OpenVINO™ Toolkit. The ultra-low-power VPU supports performance-hungry tasks at the device and gateway levels, especially for image-processing applications like predictive maintenance.

EdgeLINC can be tailored to specific solutions for its customers. “An Asian railway company needed a solution for tracking trains through locations that did not have reliable communication,” said Onigbanjo. “Sometimes trains would be stopped en route, and central operators wouldn’t know where or why. The operator needed to be able to communicate to its customers why shipments were late, as well as provide an ETA.”

“Since the railway company doesn’t own the tracks, in the future when it sees a problem with infrastructure, it can work with the track owners,” said Onigbanjo. “They can point out that there are an increasing number of stoppages at particular locations, and work to address the problems.”

The Train of the Future

Thanks to solutions like EdgeLINC, technology is playing a big role in helping rail operators prepare for the future. For example:

So are there smart trains in our future? They may already be here.