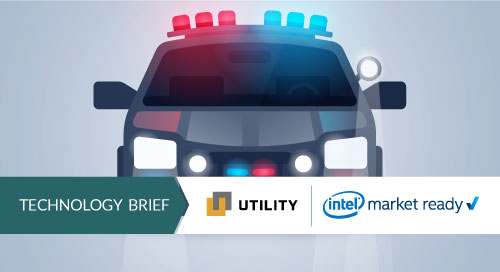 Police work has never been easy, but it’s becoming even more complex as citizens increasingly use smartphones and cameras to record police activities. While police are now regularly recorded in the course of doing their job, it is often one-sided and doesn’t always capture the encounter from start to finish or from the officer’s point of view.

In light of recent high-profile officer-involved shootings, two-thirds of officers and more than 90 percent of citizens now favor the use of body cameras to record interactions between law enforcement and the public.

Many departments are now looking to automated end-to-end video solutions to document interactions, gather evidence for investigations, and defend themselves from potential accusations of misconduct. Through AI, policy-based automatic recording, and cloud computing technologies, all vested parties can have documentation and a transparent view into police encounters.

Policy-Based Automatic Recording on the Go

The Colorado Springs Police Department (CSPD) is one example of how using an automated end-to-end video solution makes it much easier to capture an officer’s point of view.

CSPD started testing body cameras in September 2016 and has since rolled out more than 500 cameras to the entire department. So far, it has recorded more than 125,000 videos of almost every type of police enforcement action ranging from sobriety checks to pursuits and arrests. They provide valuable evidence in criminal cases and use-of-force situations, and significantly aid in the review of citizen complaints.

Some police officers have been reluctant to use body cameras for fear they might be used against them, but more have viewed it as a tool to protect themselves in light of recent national incidents. For example, after one controversial officer-involved shooting, the body-worn camera footage showed the suspect had a gun and refused to comply. The video evidence was compelling enough for a grand jury to determine the shooting was justifiable.

“Videos from different angles can tell different stories. Everybody knows that someone is going to record video of an incident. Now it’s just a matter of there being video and audio recorded from the perspective of the police officer,” said Robert McKeeman, Emeritus CEO and co-founder of Utility, Inc.

Using video to document traffic stops and other infractions is nothing new. Yet fixed cameras on dashboards have a limited field of view, and simplistic clip-on body-worn cameras must be manually turned on during every citizen interaction. The outdated equipment often distracts officers, and many forget to manually start recording.

CSPD’s system operates automatically to capture video and situational awareness with body-worn cameras, in-car cameras, and a 4G LTE-enabled platform. Integration of cameras, sensors, and vehicles brings all visual data and communications together in one location (Figure 2).

All video and comms are sent to in-vehicle routers, where data is encrypted, stored in the cloud, and made accessible in real time to headquarters or other officers in the field. @Utility_Inc

Software backed by AI technology enables the department to create policy as to when cameras will start recording. For example, body-worn cameras can be configured to start recording when officers stop their vehicle and open the door, or when an officer starts to run. A holster sensor can also start a recording, notify nearby officers, and alert dispatch when the officer draws their gun from their holster.

“The GPS, the speed of the vehicle immediately going down to zero, and the officer opening the car door all trigger the start of a video recording,” McKeeman said.

All video and communications are sent to the in-vehicle router, where data is encrypted, stored in the cloud, and made accessible in real time to headquarters or other officers in the field.

The RocketIoT system also captures data such as GPS location, date, time, and events such as when emergency lights or siren are activated, the vehicle is stopped, or the officer gets out of the car. Automatic activation of cameras and insertion of metadata enables officials to document an entire interaction from a first-person point of view—from the moment an officer engages a suspect until the conclusion of the encounter.

Many departments set policy that body-worn cameras don’t stop recording until officers step back in the vehicle and turn off their emergency lights. This not only ensures that all evidence is captured but also protects officers from accusations that they turned off the cameras prior to the end of the entire citizen encounter.

The supporting software enables an officer to watch videos in the vehicle, make notes, and share with other officers.

Evidence Management for the Smart City

The brain of the system is the Rocket 4G LTE wireless edge router, IoT platform, and video server. Powered by Intel®, it operates as a full Linux computer and includes Intel® SSD to support up to four PoE video cameras (Figure 3).

All information and video is encrypted with AES-256 encryption as it is being recorded and can be played back only on mobile devices and central computers that enable departments to control who can view footage, making relevant video accessible to district attorneys, defense attorneys, or other authorities. The software solution can also blur locations, signs, and faces of specific individuals when required.

McKeeman summed it up: “We’re about the facts. We’re not trying to be, and we don’t want to be, social and political decision-makers. Police command staff, public safety officials, and elected officials decide the policies. And the technology should execute those policies on a very secure and reliable basis.”