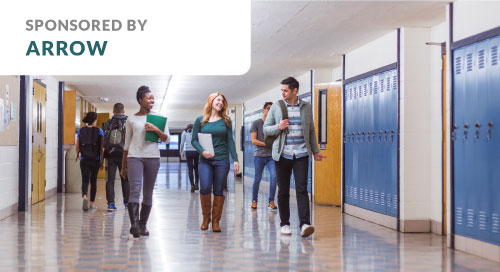 Many U.S. public schools have aged HVAC systems, leading to wasted energy. Inefficient systems not only cost money, but they can create less than ideal environments for occupant comfort and performance. According to a U.S. Government Accountability Office report, 36,000 public schools need to update or replace their faulty HVAC systems.

Because school funding is primarily directed to educational programs, repairs and maintenance often get deferred. Many school districts have also missed out on upgrades to more efficient digital HVAC systems.

But school districts that couldn’t afford to make improvements now have a new window of opportunity. In March 2021, the U.S. government allocated $122 billion to schools as part of a COVID relief program. These federal stimulus dollars are available for upgrades that increase energy efficiency and improve air quality—a serious concern in the wake of COVID.

Though most schools have some light and energy sensors, they exist in a vacuum, unconnected to equipment that is older or made by different manufacturers. The data they collect is fragmented, and building managers don’t have access to ongoing analytics that reveal important trends.

But by connecting HVAC and lighting components to a unified, cloud-based IoT platform, schools can see energy use in real time, set schedules and alerts, and spot and resolve potential problems before they happen.

“A smart-building system helps schools achieve energy efficiency in many ways. Even something as simple as setting schedules so that heating and cooling don’t run at the same time can make a big difference,” says Tim Vogel, director of IoT for KMC Controls, a provider of building automation and control solutions.

The company’s automation solution, KMC Commander, can attach sensors to most equipment, no matter how old it is or who made it. Its Intel® processor-based gateway sends sensor data to the cloud, where managers can view everything on a single, secure platform. Users can set alarms and make changes from any device, anywhere.

A cloud-based platform relieves burdens from school IT administrators, who would otherwise need to use multiple VPNs or set up and manage a local computer network to access building sensors.

IT departments also avoid the nuisance and expense of technology upgrades. For example, many schools use Adobe Flash Player for remote monitoring communications, but Adobe recently ended support for the product. “Upgrading from Flash to newer software can cost $9,000 to $12,000,” says Jesse Shoemaker, director of OEM sales at KMC. With KMC Commander, all software upgrades are done automatically in the cloud without extra charges.

KMC’s teaming with Arrow Electronics, an Intel® Solutions Aggregator, plays a key role in supporting SIs as they bring the solution to market. “As a manufacturer, we’ve had a longtime relationship with Arrow,” says Vogel. “From a deployment perspective, the Arrow team brings a huge amount of talent in understanding what’s going on in the IoT space, the convergence of IT and OT, and sales.”

And while SIs have the domain expertise, they often need support from a technological and business standpoint as technology advances. “I think it boils down to two things: support and scale,” says Roland Ducote, Arrow IoT solutions director. “We support KMC with go-to-market. Part of our job is to recruit SIs into the ecosystem and introduce them to technology like the KMC Commander.”

The experience of one of the nation’s largest school districts shows how centralized IoT-based controls bring benefits to schools.

“HVAC systems in this district spanned the gamut from well-functioning to old and poorly functioning,” says Vogel. In the winter, dampers sometimes became stuck open, drawing in cold air that caused heating coils to freeze. Replacing coils—a frequent occurrence in the district—cost between $4,500 to $35,000 per maintenance visit, depending on how many coils were affected.

Since connecting HVAC equipment to the KMC Controller solution, the district has gained the visibility to prevent such problems. “There was a huge amount of fault detection and diagnostics on root-cause issues,” Vogel says.

In addition, analytics revealed trends enabling the district to reduce its energy load and earn rebates from utility providers. “The monitoring-based commissioning agent used this data to identify hundreds of thousands of kilowatt hours to be saved, equating to nearly $700,000 in savings in two schools alone,” Vogel says.

The district is now implementing air-quality monitoring. Sensors will measure temperature, humidity, and concentration of carbon dioxide and particulate matter, including bacteria and viruses. Particulate matter can be reduced by increasing fresh-air intake and using filters—steps recommended by the EPA.

Better air quality may even improve student performance. “Studies have shown that optimizing indoor air quality makes employees more attentive and productive. It stands to reason that it would help students concentrate better and do their best work,” says Jason Mills, director of marketing and communications for KMC Controls.

Some innovative schools are incorporating IoT sensor data into the curriculum. Using the KMC Commander, Stuart Country Day School of the Sacred Heart, a private school in Princeton, New Jersey, shares some KMC sensor data with students, giving them the unique opportunity to use the data in the classroom, a practice normally limited to colleges. The KMC Commander, along with sensors and building automation controllers, helped the school reduce its energy consumption by 45%.

Further Automation on the Horizon

Even after the stimulus program, schools are likely to continue improving their building management systems—especially when they see automated controls start to pay for themselves over time. With centralized infrastructure and reporting, schools can easily demonstrate their utility spending and savings. Larger school systems can document efficient energy use to monitoring-based commissioning agents, who may help them qualify for utility rebates.

It all adds up to a greater push for automation. “There’s an anticipation of a huge amount of work coming from schools in the next few years,” Vogel says.

Some districts may incorporate new features, such as adding solar systems with battery storage. Others may adopt security cameras and people sensors to monitor social distancing or fire safety capacity, or they may work with transit systems to optimize traffic flow to and from schools. SIs can help them plan for future needs with KMC Commander, which connects with any system using standard building protocols.

“There are a million ways you can go,” says Mills. “The technology is full of potential.”