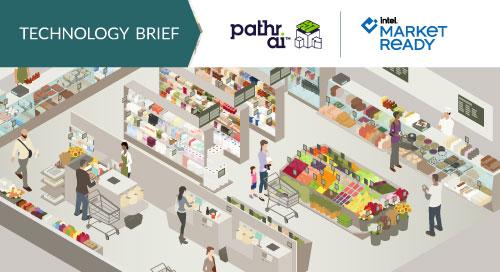 The future of retail technology is being driven by some unlikely sources, like babies learning to speak and basketball players guarding a net. On the surface, these two actions don’t seem to have much in common. But the technologies that gave researchers insights into how each group succeeds are being combined to help retailers better understand their customers.

The journey started in 2009 for George Shaw, founder and CEO of Pathr.ai, a provider of retail spatial intelligence solutions. As a graduate student at MIT, Shaw worked with Media Lab Professor Deb Roy on the Human Speechome Project—a study of how infants learn languages. For the first three years of his son’s life, Roy collected data from video cameras and microphones, examining where and when the child started learning and using words.

“Even though from what we know it’s mathematically impossible, just about every child learns to speak. Clearly there was a gap in our knowledge, and the goal of the Human Speechome Project was to begin to fill that gap,” says Shaw.

The team realized that the approach to study language acquisition could also be used to understand consumer behaviors. The Media Lab technology was installed at Bank of America and Best Buy, tracking traffic to help understand what prompts people to open a loan or buy a cell phone.

Later, Shaw worked at a sports analytics startup, Second Spectrum, that tracks players on a basketball court, applying machine learning to the data set to collect insights coaches could use to help their teams win more games.

Spatial intelligence is a cognitive layer that sits on top of #AI. “It provides higher-level reasoning and is the business #intelligence layer that says, ‘Here’s what this tracking actually means.’” – George Shaw, @Pathr_ai via @insightdottech

Connecting the Dots with Retail Technology

By studying a baby’s babble and a basketball player’s dribble, Shaw discovered that regularities and interactions in an environment could create valuable retail analytics. The Pathr.ai Spatial Intelligence solution uses machine learning to track the movement of people inside stores. Spatial intelligence is a cognitive layer that sits on top of AI. “It provides higher-level reasoning and is the business intelligence layer that says, ‘Here’s what this tracking actually means,’” says Shaw.

Pathr.ai’s solution leverages existing video cameras, with devices fed into a local server. The cameras detect people anonymously, producing dots moving around a map, and those dots move into the Pathr.ai Behavior Engine.

“It’s where the playbook lives,” says Shaw. “We extract business intelligence from the movement of those dots in real time to make decisions.”

AI is run on the local server, which requires the most compute horsepower. “We’re able to run in various environments, but the most efficient and cost-effective is with systems built on Intel processors and the Intel® OpenVINO™ for our computer vision,” says Shaw. “With Intel, we have the best technical solution.”

Tracking dots allows Pathr.ai to address retailers’ biggest pain points. Lower foot traffic in stores due to an increase in eCommerce makes customers who enter a location more valuable, but staffing shortages can make it challenging to properly serve them.

“We’re able to optimize each customer’s experience,” says Shaw. “If they have a more enjoyable experience, they may buy more things. And we can make more efficient use of each staff member’s time and ultimately require fewer staff hours, which have become scarcer and more expensive.”

For example, a jewelry counter inside a store may see only 10 customers a day. Instead of dedicating an employee to service a small percentage of customers, you can task the person with other work. When a customer needs help at the jewelry counter, Pathr.ai detects them and sends a notification to the employee.

“It’s zone defense instead of a person-to-person coverage,” says Shaw. “It’s a more efficient use of the people you have available through dynamic staff allocation.” (Video 1)

A major grocery store chain in the United States uses the solution’s real-time data to measure queue lengths and adjust the number of open checkouts. “In a grocery store, the checkout experience is a huge part of how grocers differentiate themselves,” says Shaw. “Many of them have similar products, store layouts, and promotions. So the experience you have at the checkout matters a lot.”

Pathr.ai measures queue lengths and understands wait times. The system can make a prediction on how long a customer with a full cart of groceries will wait. If the expected wait time goes above a threshold set by the grocer, it will notify a staff member to open another checkout. If all the checkouts are open, the grocer will open more self-checkouts. As a result of implementing Pathr.ai’s Spatial Intelligence solution, the major U.S. grocery chain improved operational efficiency, customer experiences, and store profitability—anticipating a +20x annual ROI.

The Future of Retail Technology Is Driven by Consumers

Eventually, Shaw says spatial intelligence will be able to help retailers understand other pressing issues, such as shoplifting. “Discerning that behavior in real time in an anonymous and unbiased way can help end shoplifting,” he says. “That’s a benefit not just to our enterprise customers but to all of society.”